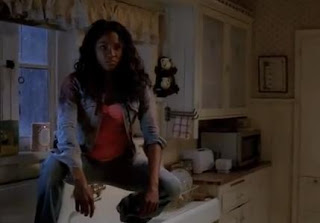 Did Pam succeed in turning Tara into a vampire? This was the biggest question from last week’s cliffhanger of an episode on True Blood. For me, I was more curious if Tara was aware that she was about to eat her best friend. Here is our recap of tonight’s new episode of True Blood: Authority Always Wins.

Season 5, Episode 2 starts off with Pam commanding Tara to not eat her friends before she gets on with her day.

She’s not interested in training Tara whatsoever so it’s up to Lafayette and Sookie to keep her under control. Right now, Tara is zooming around Sookie’s house tearing the place apart. This poor girl. She just got done fixing it up and bleaching the kitchen. I hope she has good insurance.

They’re able to drag Tara by a silver chain into a cubby for the day so Sookie can buy some silver mister thing that really doesn’t look like it’ll do much of anything. Sookie should just move at this point. Lafayette fears they made a mistake and thinks staking Tara is the best thing for her. She probably agrees. Tara wakes up and finally speaks to her friends. Unfortunately, it’s not what they want to hear: I will never forgive you two. That’s all they get before Tara zooms off into the night. I wonder who she’ll meet first?

Bill, Eric, and Nora, are taken by the Authority to some kind of Vampire torture prison so they can get some answers out of them. Admirably, neither of them cave or throw the other under the bus. Stabler and the rest of the Authority seem to be following a fundamentalist Vampire bible that spouts the belief that God was a vampire and created Adam and Eve for a Vampire snack. Hm. And here I thought Newlin was the nuttiest one in the can. The group debates over what to do with the handsome duo so Bill offers up a bargain. Instead of the True Death, he will bring them Russell Edgington. Shocked to hear that he is even alive, this seems to buy them some time from the Authority. For now.

Eric isn’t exactly returning Pam’s calls right now and this has her reminiscing about the good old days in 1905 when she met Eric. He saved her from some rapist with a knife and gave her a bit of his charm before he disappeared. I really wish we had gotten more of this flashback tonight. Hopefully next week we’ll see more of these. They’re definitely more interesting than Luna’s plot. She fights with Sam over Emma possibly being a wolf which ends up being pointless because Luna discovers a little wolf in Emma’s PJs. The end.

The scenes before this with an angry Alcide refusing to eat Marcus because he isn’t hungry were entirely more entertaining. All 30 seconds of it. Angry Alcide? Yes, please. Will we be seeing more of this Alcide soon? Probably. Andy and Jason find Debbie’s abandoned car so it’s only a matter of time before Alcide finds out what Sookie did. I keep forgetting he cares.

Something odd is going on with Terry. He’s obviously experiencing some sort of PTSD from his time overseas with Patrick but this seems like something more. Obviously having to do with whatever secret they’re keeping, the two of them go off to find a former friend from their group. All I know is, Terry getting violent and screaming at Arlene is not okay. I miss the Terry who hugged armadillos.

Easily, my favorite part of the night had to be Steve Newlin dancing into Jessica’s house party looking to make a deal for Jason’s rock hard butt. Too hilarious for words. I can’t wait for the gifs that are sure to pop up from that one. Jessica declines his money offer and Steve is forced to leave with his fangs between his legs. If Hoyt wasn’t being such a Debbie Downer lately, I’d tell him to bark up that tree.

Andy: Stackhouse. I had sex.
Jason: Hey! Welcome to the club.
Andy: It’s not the first time, Assmunch.

Andy: Have you slept with every woman in this town?
Jason: I dunno. Close I guess.


Hoyt’s mama telling Jason she’s gonna bake him a pie for getting rid of Jessica.

I have so many questions about next week’s episode of True Blood. Is Tara aware? Does she remember who she is? Does she know she got shot and now she’s suck living (kind of) as a vampire? One thing is for sure, she looks pissed. And speedy. Perhaps a little hungry? In this sneak peek of “Authority Always Wins” Tara is speed racing all over Sookie’s kitchen. And she just cleaned that place too. I hope she has coupons for some more bleach.

Here are some sneak peek videos of next week’s episode: “Authority Always Wins.”

You can check out the official preview “Authority Always Wins” here 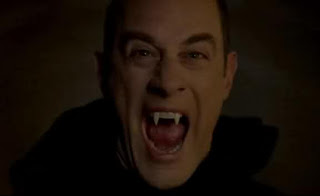 After a shocking season premiere, I can’t wait to see what the rest of the season has in store for us. What is going on with Tara? What will The Authority do to Bill and Eric? Will Steve ever have any friends? Here is the promo preview video for next week’s new episode of True Blood: Authority Always Wins.

Check out our recap of the season premiere here