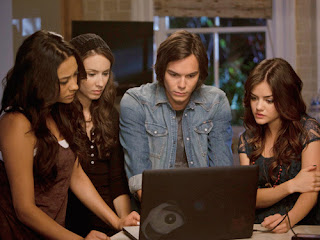 This episode of Pretty Little Liars was amazing. There is no such thing as Sophomore Slump when it comes to this season. This episode was action packed, full of suspense and thrills, and pretty much made everyone from Lucas to Byron look suspicious.

The girls freak out over what to do with A’s phone. Three out of four want to take it to Caleb for his hacking skills. Didn’t they used to think he was A? Hanna really doesn’t want to get Caleb involved in any of this and is pretty resistant at first. Hanna is probably just using her brain and aware of the fact that every single person in this town is sketchy and she doesn’t want Caleb in danger. Unfortunately for them, A wipes the phone from their hideout and everything is corrupted. Caleb is only able to recover a picture of the dolls A used. Caleb is starting to get pissed at Hanna for not telling him everything that’s going on. She wants to make it up to him by throwing him a surprise birthday bash at Spencer’s lakehouse. She recruits the help of Lucas (and uninvited guests Noel and Mona) to throw the perfect party in a dark spot in the woods. Totally safe!

Everyone is on edge in this town. Aria has been banned from seeing Ezra in any way and even he has told her not to call his house anymore. Hmm. Suspicious. Aria’s parents are already pushing her to be with an old family friend who is back in town. His name is Holden, he has poofy hair, and his dad is Mr. Turner from Boy Meets World. Jenna and Garrett are suddenly on the outs with each other and Garrett is not happy about it. She’s pissed at him for something and she’s gone to Boston for eye surgery without him.

Emily has to finish her community service at a crisis center hotline and is alarmed when the group reads a transcript from the night before that sounds a lot like a panicked A. It’s a frantic person who lost something and shut down something and are panicking because “they” will make their life miserable so they’re better off dead. Yikes. We actually learn that Lucas is the frantic caller who calls a few more times desperate and upset about something. To me, it sounds like Lucas wants to kill himself but to the girls, and rightfully so, it sounds like he wants to kill Hanna.

Spencer realizes that the wall in the photo from A’s phone is from the attic in her lakehouse. Two seconds later, Lucas walks in and acts creepy. Emily speaks to Lucas on the phone and he says how hard it will be to be rid of Hanna forever. Okay. Not looking so good for Lucas. Before they can stop her, an oblivious Hanna goes out in a boat to the middle of a dark and foggy lake with Lucas where no one can apparently hear her screams.

Lucas gets scary real fast and refuses to let Hanna speak or move. Hanna knocks Lucas out of the boat with an oar before he can do anything else to her. He disappears into the water and Hanna is knocked out of the boat by an anonymous hand. When she gets to shore, we see Mona and Noel are also wet. Obvious much? I do appreciate a shirtless Noel Kahn though.

Who is suspicious this week:

Lucas for all obvious reasons but I’m still betting he wanted to kill himself and confess his feelings instead.

Melissa. She would have access to the lakehouse attic and she is never ever around. In her pregnant state she could be hiring minions to do the dirty work for her.

Mona and Noel. Could be the “They” we keep hearing so much about. Mona was treated terribly by Alison and something tells me they weren’t just skinny dipping in that lake.