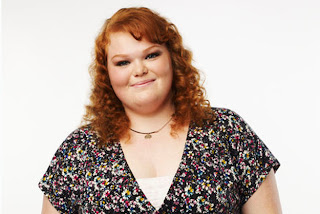 Hey Gleeks! We recently had the honor of interviewing a fan favorite from The Glee Project, Hannah Mcialwain. We chatted about her time on the show as everyone’s favorite sexy koala bear, her work with Hope’s Voice, what happens when the cast is left alone with whipped cream and what fans can look forward to from her next. Check it out!

Hey Hannah! Thanks so much for the taking the time to talk to us about your time on the Glee Project and everything you have coming up. We’re big fans and it’s been great seeing you follow your dreams! Let’s kick things off with The Glee Project.

PopCityLife: What made you decide to initially audition for The Glee Project? Did you always know you wanted to be in show business?

Hannah Mcialwain: I had known for a few years that I wanted to be a performer, but the fact that the prize was a role on Glee really pushed me to audition. Something in me just sparked and I knew I had to take a chance.

PCL: How did you react when you got the call telling you that you made the cut? What was the first thing you did when you found out you were going to be on the show?

Hannah: I’m pretty sure it was the first time in my life that I couldn’t make noise… haha I remember asking Robert [Ulrich] if he was kidding over and over again. Then after we hung up on Skype, I just sat on my couch in my dorm room for a solid 5 minutes in total shock. I couldn’t believe he said yes!

PCL: The Glee Project cast had the opportunity to work with some amazing people. Did you have a favorite guest mentor?

Hannah: I feel very blessed to have gotten to work with all the guest mentors, but I especially enjoyed my time with Dot Marie Jones. She is the most kind-hearted woman I have ever met and she really took the time to give us all individual attention during the video shoot. I don’t think I would have made it through that day without her.

PCL: How about a favorite group performance or music video? What about the dreaded slushies? Did you find “getting slushied” all that it’s cracked up to be?

Hannah: I definitely had the most fun with our “Under Pressure/Ice Ice Baby” video shoot. I was really looking forward to getting slushied and after the initial shock and feeling of having a brain freeze on the outside of my head, I honestly enjoyed myself.

PCL: Fans on Twitter reminded us about a certain hilarious incident involving you, whipped cream, Lindsay and Alex, and a very shocked Damian. I think we all want to know what was going on there. Care to elaborate?

Hannah: Oh lordy. My mom wanted to kill me after that! Haha Well the idea was that we were all feeling a little uncomfortable with the idea of sexuality. So we thought if we did something way out of the box and over the line, then being sexy onscreen the next day wouldn’t be as hard. It really came in handy for me, since Cam and I had a food fight. Haha

PCL: Audiences were definitely shocked when Ryan Murphy decided to award the top 4 each with a role on Glee. Were you surprised?

Hannah: I was in total shock! But I was truly happy for all of them. They all worked so hard and deserved to be on Glee.

PCL: We loved Damian’s shoutout to you and Cameron right before he performed on the finale. We thought it was really cute and showed how much you guys cared about each other. How did you feel when he dedicated that last performance to you guys?

Hannah: I thought it was really sweet. At first, I thought he had just said my name then realized he threw Cameron in there as well.. haha It meant a lot to me though, honestly. 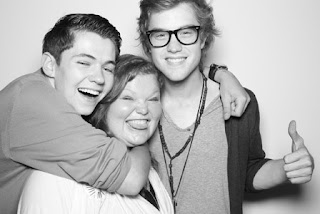 PCL: Any regrets while on the show? Was there anything shown on The Glee Project that you wish didn’t make the cut or vice versa?

Hannah: Heck no! I went into it saying “Hannah, no regrets!” and I left saying the same thing. I gave it my all and I am very proud of what I accomplished.

PCL: Once the show ended, the cast was pretty much thrown into the spotlight. Obviously this is going to come with the good and the bad. How have you been finding the fans? Have you had any crazy or funny fan encounters?

Hannah: Everyone is bound to have a few rude comments said about them here and there, but I am very blessed to have a mostly positive experience with the fans. And the funniest fan encounter has probably been when a fan made Lindsay, Damian, and I bars of soap with our faces on them! Haha

Hannah: I always knew that all the madness and hard work was worth it, but I did have that “Holy cow, I’ve arrived” feeling when I stepped onto the red carpet at the Glee 3D Movie premiere. People were screaming so I turned around to see what Glee cast member had arrived, but then I heard MY name! It was one of the best nights of my life and something I will not soon forget.

PCL: Do you still keep in touch with everyone from the show?

Hannah: Yeah, for the most part. I get to see some more than others, since we live in the same city. But we are a family and it’s important to keep in touch.

PCL: How’s the apartment hunting going? We know that you lived with Lindsay for awhile after the show, are you two still roomies?

Hannah: Being an adult is harder than it looks! Haha And no, we aren’t roommates anymore. But we still see each other all the time! She’s a best friend for life. : )

PCL: And then there’s Damian. America seems to be falling in love with him, and rightly so. What do you think it is about that Irish charm that’s so endearing?

Hannah: Of course they are! I mean, how could they not fall for him? lol I think he is obviously very cute, but more than that, he is just a genuinely nice guy. He really cares for people always tries to do the right thing. And that adorable accent doesn’t hurt 😉

PCL: We know that you’re very good friends with Damian and Lindsay. Were you excited to see them on Glee? What did you think of Damian’s debut episode?

Hannah: I felt like a proud Mamma bear watching them on Glee! I was really impressed with both of them and I thought Damian did a great job in his first episode! He must have felt a lot of pressure with having such a major role in the episode, but I think he held his own. I can’t wait to see him grow as an actor throughout the season.

PCL: Fans first caught a glimpse of you on MTV’s Made where you wanted to become a rapper named Rouge. We definitely watched that episode when it originally aired after it got a glowing review from David Archuleta. Since his fans make up a large part of our audience, we have to ask, how did you two become friends? Do you guys still talk? We’d love to see a collab happen one day!

Hannah: I spent a lot of my childhood in Murray, Utah and David and I know each other from school. He was SO shy back then! But always really sweet and caring. We haven’t spoken in years, but maybe a collaboration could be a possibility..

PCL: We know that you recently got involved with Hope’s Voice and their True Beauty campaign, which focuses on helping young people with self-acceptance and embracing their inner beauty. Can you tell us a little about your work with them and what made you want to get involved?

Hannah: Basically, I go around to different colleges and talk with students about overcoming their insecurities and realizing their “true beauty”. I have struggled with self-confidence issues in the past and I see this as an opportunity to help others get past their own issues. I just feel blessed to have the chance to affect people’s lives in a positive way.

PCL: We wanted to let you know that we’ve been getting multiple requests on Twitter from your fans to tell you that you’re way sexier than a Koala bear.

Hannah: Haha well thank you! I definitely agree with that after watching our “Teenage Dream” music video.

PCL: Since Halloween just passed, our readers want to know, how did you spend it? Did you dress up?

Hannah: I didn’t dress up this year… But I spent it with some TGP friends at Damian and Cam’s apartment just playing music and chatting. It was really fun and relaxing.

PCL: Do you have any advice for fans out there that are trying to make it in this business?

Hannah: As cheesy as it sounds, the best thing I can tell you is to just BE YOURSELF! Never lose sight of who you are and don’t change for anybody. Someone will see you for who you are and love it! And be your own best friend, not your own worst enemy. Keep a positive outlook and never say “I can’t”.

PCL: What can fans look forward to from you? What’s next for you?

Hannah: I am trying to keep making music, so hopefully I will be adding things to my YouTube channel. And February is pilot season, so hopefully you will be seeing me on your TV again very soon!

PCL: Is there anything else you want to say to your fans?

Hannah: I just want to say thank you all from the bottom of my heart! I don’t think you will ever know how much you guys mean to me. Your words on Facebook and Twitter inspire me daily and I hope to continue making you all proud. Love you and Skadoosh! : )

We want to thank Hannah for taking the time to answer these questions for us. Be sure to follow her on twitter to keep up to date on what she has coming up!