Stevie Nicks Sends Letter To The Cast of ‘Glee’ 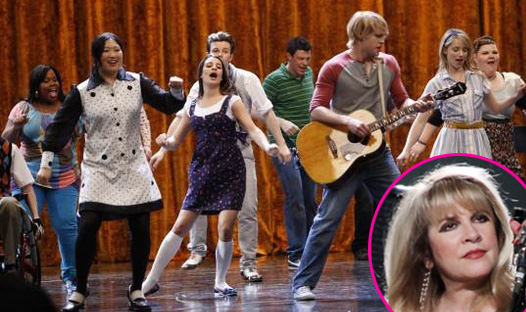 Stevie Nicks has come out in support of the cast of Glee following the tragic death of cast member Cory Monteith. Cory died this past year of a drug overdose, something Nicks is familiar with. Stevie wrote a letter to the cast after growing closer to them following a visit to the set.

She told the Sunday Telegraph newspaper’s Stella magazine: ”I said, ‘Forgive me if I’m stepping into your personal space. I lost my godson to an overdose last year- he died at a fraternity party – so I understand how shocking that is’.

”When what happened to Cory happened, I just was sick for days. Honestly, just sick. It’s just so prevalent. It’s everywhere. It’s worse than when we were young.”

The star has battled with drug addiction in the past – from a 10-year cocaine habit to sedative clonazepam which was prescribe to help her overcome it – and she knows it cost her the chance to settle down and start a family.

She added: ”That was stolen. And that’s not forgivable, ever … [But now] I think I am stronger than a lot of people. And I knew then, as I know now, that I still have so much to do.”