Amber Tamblyn Cast in ‘Two and a Half Men’ 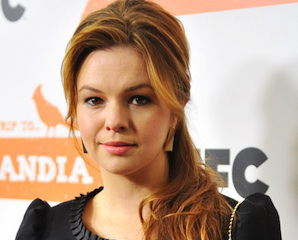 It seems CBS and Two and a Half Men have found what they’re looking for. Amber Tamblyn has been cast in a much talked about role. She’ll be playing the long lost lesbian daughter of Charlie Harper’s character. The role will more than likely take the place of Angus T. Jones.

he character, Jenny, shows up in the CBS comedy’s Sept. 26 premiere upon moving from New York City to Los Angeles to pursue a career in showbiz. She ends up crashing with her Uncle Alan (Jon Cryer) and Walden (Ashton Kutcher).

“She’s somewhat of a chip off the old block,” explains exec producer Chuck Lorre of Jenny. “She’s having a good time and doesn’t care about the destruction left behind her. Decadence from the other side felt long overdue.”

Tamblyn’s role is recurring (she’s booked for five episodes so far), with the option to become a series regular — ostensibly filling the void left by Angus T. Jones’ full-time exit.

Tags: CBSTwo and a Half Men
No Comments
Share
0