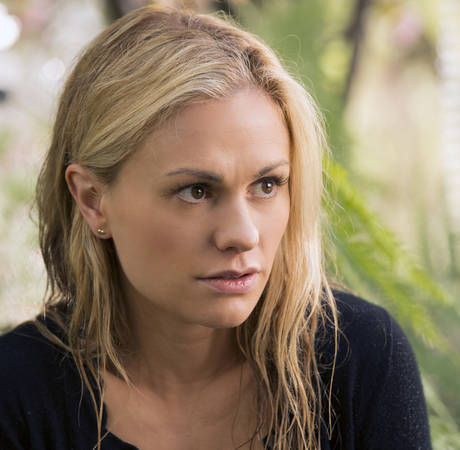 This season of True Blood has been absolutely on fire all Summer long. I’m not sure if Alan Ball’s absence is the reason or if the show has gotten new writers but I am loving almost everything about it (RIP Terry).

Tonight’s episode was no exception. If anything, this episode was setting up for an out of this world final two episode of the season.

Eric is not happy with Bill for failing to deliver Warlow to him in time to save his sister Nora. They argue and Eric disappears for most of the episode to set a plan in motion to save all of his friends from the Sun. This plan, so far, involves c*ckblocking Andy’s daughter from getting to second base with Holly’s son and drinking a ton of her blood, presumably, to walk in the daylight. #SaveEric.

Sookie asks Warlow for his thoughts on helping Bill with his mission to save the vampires. She promises she won’t agree to anything unless Bill agrees not to hurt Warlow. Warlow will only help Sookie if she agrees to let him turn her and then be his for eternity. Oh for the love of Billith.

Sookie then does some serious soul searching after a less than friendly conversation with Bill. He has turned into quite the Dbag. He tells her to go ahead and become a vampire because he couldn’t care less. She happily tells him to f*ck off.

She contemplates using her fairy ball of light to end her vampire magnet ways for good. Perhaps walking the earth as a corpse wouldn’t be so bad? Um, YES IT WOULD. It’s a horrible idea and I don’t want it to happen. Ugh.

You know what else sucks? The fact we were so damn close to ending the Wolf storyline for good. Rikki challenges Alcide as the leader of the pack and dares him to kill her and her friends. A fight scene ensues and I’m so eager for Alcide to finally just wipe them all out that when he doesn’t follow through, I could have punched my screen.

Just as ridiculous: Sam loves Nicole. I’m sorry, didn’t his girlfriend die like 5 minutes ago? It can’t have been longer than a week in True Blood time. Equally confusing, Nicole is pregnant and Sookie suddenly decides she could have a future with Sam.

Um. What? When was the last time you even showed up to work, girl? I would love Sam and Sookie to be endgame but at least have a subtle build up. Her randomly propositioning him was awkward, rushed, and lazy.

Elsewhere, Arlene fights with Terry’s family over the funeral arrangements and Sam finds a little armadillo figurine in his locker. Awwwwwwwwwwww. Felix!

Over at Vamp Camp, Jason is stuck being a chew toy for Violet, the head bitch in charge of the room. I don’t like her but I aww’d when Jason politely asked her not to rape him. That were-panther storyline was the worst.

Other than learning that Steve used to get a lot of wedgies as a child, we learn that a handful of vampires are refusing to drink the Tru Blood. James warns Steve so he can join in the party and it lands them both in the circular room of doom. After Sarah tortures Steve with a giant hamster wheel, she discovers the identity of all who know about their evil plot and chucks them all into the room. #SaveSteve Watching Steve cry is actually very sad for me. Even worse? Watching Miss. Suzuki get into one of the worst/best fights of the season. She knees Sarah in the vag and propels herself into the vamp camp to see what is going on.

Sarah chases her and catches up rather quickly. Probably because this girl was too stupid to take her heels off. She then breaks her ankle, and Sarah uses her own shoe to bash her head in and kill her. GROSS.

Will Eric save his friends now that he has drained Warlow and Adalynn? Is Warlow dead? Will Sookie become a vampire? This season is awesome.

Funniest Quotes of the Episode:

Nicole’s mom: And just how old are you. Silver Fox?

Eric: Mother! I can fly!

Check out the preview for next week’s episode: “Life Matters.”