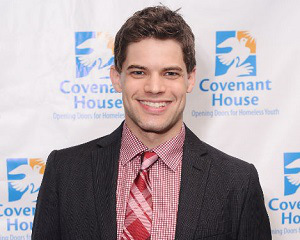 Jeremy Jordan is doing quite well for himself after Smash. He’s currently working on his role in the movie “The Last 5 Years” and can now expand on his guest starring roles. The actor is set to guest star on the new season of Elementary.

The actor will guest-star in a Season 2 episode of the hit CBS drama as someone with a connection to Joan’s past, TVLine has learned exclusively.

Jordan will appear in an October installment as Joey Castoro, the son of the surgical patient who died in Watson’s care. The surgeon-turned-P.I. has an affinity for Joey, but her affections for him are tested when he comes to her with an unexpected request.

“We’re going to… explore Joan’s feelings of guilt,” executive producer Rob Doherty recently told TVLine. “At what point do you tap your guilt and give yourself permission to live a life?”

The Last 5 Years is based on the musical of the same name and also stars Anna Kendrick. Because the movie filmed around New York, we’re guessing the characters won’t be searching for homes for sale louisville ky right away. Will you be tuning in?