You might recognize Joe Rogan from his role in the 90’s sitcom Newsradio or his work as the host of the popular competition show Fear Factor. More recently, Joe has been working as an announcer with UFC.

Now, Joe uses a unique blend of his comedic talents and legitimate research to uncover the truth about some of the world’s most interesting theories and unexplained mysteries.

Joe Rogan Questions Everything premieres July 24th on SyFy and will air Wednesdays from 10-11p.m. ET.

We recently had the chance to chat with Joe about the new series. Check out our interview with Joe Rogan here:

Q)So can you talk about how you became involved in making the show for Syfy?

Joe Rogan: Well, the show is something that I wanted to do for a long time, because I’m a dork. And I’ve always had these questions about all these different, obscure, weird subjects like Bigfoot and aliens and UFOs—all these strange, fringe, silly things for an adult to concentrate on. And I always thought it would be really cool if I could do some sort of a show that answered the questions that I wanted answered.

Because all the shows that I ever saw, were either debunking shows or they immediately dismissed everything and went at it to dismiss things. Or they were these shows that sort of embraced every ridiculous possibility, you know, as who knows. It is a mystery.

I thought, ‘There’s got to be a way to bring both camps together, to bring all the cookoo heads and all the scientists and get some real answers.’ And also, do it with comedians and make it entertaining, because these are ridiculous ideas. There’s a reason why Bigfoot is something if brought up in a legitimate conversation, people like push their chair away and excuse themselves.

They’re dumb subjects. And so I wanted to treat it with a sense of humor, and I wanted to also treat it with a completely open mind, and talk to legitimate scientists if they’re available in all these various fields for all the various subjects, and see if we could sort of come up with some answers and make an entertaining show along the way.

Q) How is it different from many of the other type of Syfy shows. You’re not necessarily saying whether it’s true or not?

Joe: If we find out that it’s true, yes, we’re saying it. But what we’re doing is we’re just approaching every single subject completely open-minded, even the one that I didn’t believe in — the ones that subjects that I thought were completely stupid. I sat down with these people that were experts or believers, and I gave them the time of day. I gave them a shot. I gave all of them an opportunity to explain themselves and I asked them objective questions. I tried to respectfully poke holes in their arguments. So every time I approach the subject, I approached it as open-minded as possible.

Q) I’m curious does sort of the fascination with a lot of these different mysteries, Bigfoot and even some of the government stuff, does it go back to sort of your childhood, sort of, little boy with a lot of questions?

Joe: Yes, without a doubt. I’ve just always been a big fan of “In Search Of,” the old Leonard Nimoy show and of the Art Bell Radio Show. I love that show. Even if it was really dumb, people could call up and they could have, you know, they could say, “I’m a time traveler.” And Art Bell would go, “From what time?” And you would be listening in the car, like, with a big stupid smile on your face, you know, listening to these people talk about these silly subjects. For whatever reason, they’ve always fascinated me. I’ve been fascinated by mysteries and fringe subjects like that. I just think they’re fun.

Q) On the show, did you have any disappointment with the people that you talked to, like, is there sort of a feeling when you do disapprove something that you kind of lose a little bit that wonderment about these things?

Joe: Yes, unfortunately. Yes, when you talk to like legitimate scientists that are shooting every possible hole in these ideas that you cling to, like a child’s security blanket, yes. There’re those moments for sure. Because there’re things that can be answered. There’re things that people want to believe in that there’s zero basis in fact. And, in fact, they’ve been thoroughly debunked by science. So there’s definitely those issues. 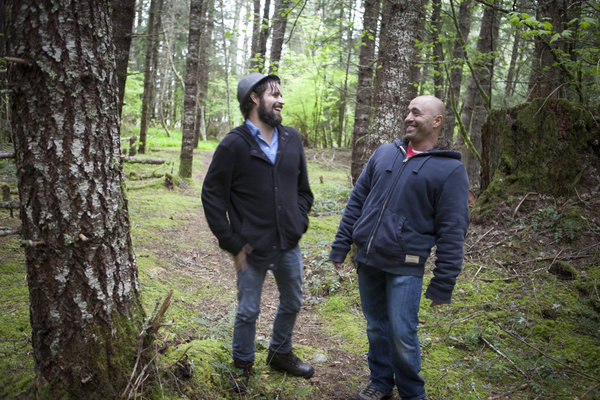 Q) Was there a particular episode for this season that totally changed your mind about what you may have thought, whether it was you believed in it and you debunked it or you totally thought it was nonsense, but they kind of started making you think it might be possible?

Joe: There’s actually a couple, yes. I don’t want to get into the specific detail, but actually the second episode kind of tweaked me a little bit. It’s about HAARP. HAARP is the High Frequency Active Auroral Research Program. It’s this array of antennas that they have that’s up in Alaska that they shoot radio waves to heat up the ionosphere.

And the official explanation is that it aids in communication, because when they manipulate the ionosphere, they make it so—I don’t know if you’re aware of this—but sometimes during certain storms you can pick up radio stations from, like, really far away. And the reason for that is the shifting of the ionosphere. And the HAARP array, the official explanation is that it wasdesigned to do that.

But along the way we talk to a bunch of scientists and really intelligent people who said that, “No, it’s possible to do a lot more. And it’s actually possible to manipulate weather.” And they thought that it may even be responsible for super storms, and that it may be possible to target storms. These are really intelligent people that were telling me this. So that was pretty shocking. That was just one. There’s been a few, actually.

There’s a guy named Dr. Jeff Meldrum that’s on Wednesday’s episode. A very intelligent guy, and when we were talking to him, my friend, Duncan, who’s on the show with me, he, like, before that didn’t think there was a possibility of all that Bigfoot existed, but after talking to Dr. Meldrum, he was convinced that it was real.

Q) If it gets picked up for a second season, are there any offers you already know you want to go?

I don’t want it to be too conspiracy theory-y, you know, that’s not what I set out to do. I wanted it to be a fun show that is about mysteries. But along the way, there’s a few of those conspiracy-type elements thrown into this. They just came up as we were investigating it. But I think there’re quite a few subjects that can still be covered.

Pop City Life: Out of all the topics you investigated on the first season, I was wondering if there was one that kind of intrigued you the most or one that you would say is your favorite.

Joe: Bigfoot always has been my favorite. I don’t know why. I’ve been fascinated by primates since I was a little kid. When I go to the zoo, I immediately go to see the monkeys. I immediately go and check out the chimpanzees. I think that primates, other than ourselves, are incredibly fascinating because if they didn’t exist, they wouldn’t be the stuff of movies. You know, if a gorilla didn’t exist and you saw one for the first time, it would be utterly fascinating this human-like thing that lives in the jungle and chimpanzees same way.

And the idea of Bigfoot, when I was a little boy, I thought it was incredibly fascinating. And then as I got older and I listened to people like Jane Goodall say that they she believes that Sasquatch is a real animal. Jane Goodall, the famous primatologist.

And then when you find out that they’re used to be animal called Gigantopithecus, which is a huge 8 to 10 foot tall bipedal hominid. So it stood up straight on two legs like us and it was as tall as 10 feet tall, and it lived alongside human beings as recently as 100,000 years ago. They found bones of these things. We didn’t even know about them until the 1920s.

And the way humans found out about it was in an apothecary shop, a guy was searching around for bones and found this primate tooth that he knew was not a gorilla, was not a chimpanzee, and way too large to be a human being. And from there, they started asking the people to shop where they got this, from and they got other bones and they realized, “Oh my God, we have a species we didn’t know about.”

And then they also determined from those species, from those bones, because the shape of the jaw, that this was a bipedal animal, some sort of gorilla-type animal that walked on two legs and it was huge. So essentially it was a Sasquatch that used to be a real animal. So that to me is the big one.

Q) Is the show just you and the experts that you’re interviewing on any given week or do you go into the situations with a partner or a team, and, if so, can you tell us about them?

And Duncan especially shares my love of conspiracies. He and I actually got back from Utah we were researching this place called Bigelow Ranch, which is a famous UFO hotspot. Just as friends we’ve had these conversations many, many times on our own without a TV show.

Q) What has been the most exciting and the most ridiculous moments that you have tackled so far, even with yourself or with Duncan?

Joe: I don’t think I could narrow it down to one. There’ve been so many ridiculous moments. The ridiculous – the most ridiculous aspect is what people are willing to believe. We’ve had people describe to us bulletproof wolves that are the size of horses that turned into mist. And I’m not kidding. They vanish and turn – and these are grown adults with straight faces, they’ll talk to you about bulletproof wolves the size of horses that disappear into mist.

Yes, shape shifters, there’ve been a lot of people that are convinced that there’re these inter-dimensional creatures that come from a vortex. We actually just got back from Utah where this was one of the things that we covered at this Bigelow Ranch place. These people believe that these beings can shift shapes and, yes, that’s hard to believe.