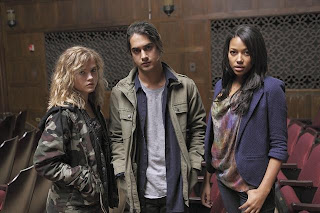 We are 19 days away from the premiere of ABC Family’s Pretty Twisted Tuesdays. The new Tuesday programming block will feature the season 4 premiere of Pretty Little Liars and the series premiere of the network’s highly anticipated mystery thriller Twisted.

We’ve already seen the pilot episode of Twisted and I think this show will interest fans a lot more than recent duds like The Lying Game and Bunheads. The premiere episode was full of mystery and cliffhangers and perfectly set up fans to tune in for the rest of the season.

Check out these sneak peeks of the pilot episode of Twisted here:

“Twisted” (formerly “Socio”) is a one-hour mystery full of twists and turns that is centered on a charismatic 16-year-old with a troubled past who recently reconnected with his two female best friends from childhood. He becomes the prime suspect when a fellow student is surprisingly found dead in her home. The series will be executive-produced by Gavin Polone, (“Gilmore Girls,” “Zombieland,” “Curb Your Enthusiasm,” “My Boys,” “Jane By Design”) David Babcock (“Brothers & Sisters”) and Adam Milch (“Greek”), who also wrote the pilot. The drama stars Avan Jogia (“Victorious”), Maddie Hasson (“The Finder”), Kylie Bunbury (“Prom”), Kimberly Quinn (“Terriers”), Sam Robards (“Treme,” “Gossip Girl”), newcomer Ashton Moio and Denise Richards (“Two and a Half Men”). The series is produced by Prodco, Inc.