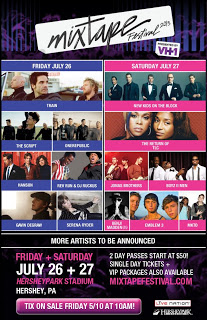 This July, Mixtape Festival is returning to Hershey, PA. The annual two-day event is heading back to HersheyPark Stadium with a lineup that is bigger and better than ever. All of the greatest in pop music are hitting the stage in what can only be described as a 90s fan’s dream. On Friday, July 25th, bands like Train, The Script, Rev Run and DJ Ruckus, Hanson and OneRepublic are all scheduled to perform. Then on Saturday, July 26th, New Kids on the Block, Jonas Brothers, Boys II Men, Emblem 3 and TLC will each take take their turn at it. Yes, you read it right, we said TLC. The R&B girl group are making their official comeback at Mixtape Festival, so you don’t want to miss this. More artists are still to be announced, but tickets go on sale May 10th at 10 am. Check out the lineup below:

This is one lineup you’re not going to want to miss. Hanson? New Kids on The Block? Amazing. Fans are going to be flocking to Hershey, Pennsylvania. The great thing about this lineup is that there is something for everyone. Adults and kids alike are going to want to see this show and will probably travel from great distances to check it out. I can see parents wanting to bring their kids to enjoy the groups they grew up with and kids dragging their parents to see the groups they love now. Either way, they’re going to need to book cheap hotels to make this a weekend they’ll never forget. And hey, there’s chocolate.