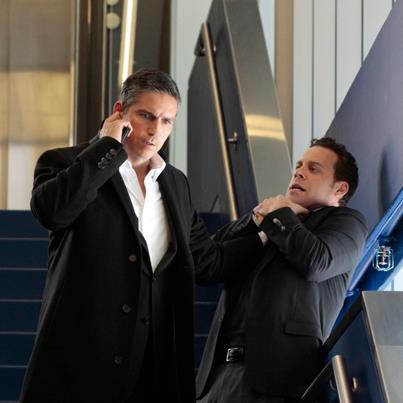 My nerves were high upon starting this episode of Person of Interest. What with it being around the time that networks bring out everything they got for sweeps week, I was a little on edge to say the least. The description of the episode didn’t help and it left fans of the show fearing that their loveable and favorite dirty cop Lionel may not survive. What happened when Lionel’s dirty past comes back to bite him in the ass?

Check out our recap of tonight’s new episode of Person of Interest: “In Extremis.”

The machine has been a bit iffy lately. It isn’t delivering the numbers in time and our dynamic duo have been unsuccessful in their quests. First Beecher and Shamansky and now their most recent identity. A high profile doctor is poisoned right under Reese’s nose. He’s a terrible waiter. He has 24 hours left to live and John takes him out of the hospital to help him track down the man responsible. Eventually, John poisons the man responsible with the same poison and their number gets to look him in the eye as he’s going down.

After defying HR and that douchey cop that refuses to die, he’s being set up for the murder of his former partner. Lionel didn’t do it. He just buried him.

We’re treated to flashbacks of Lionel’s past to see how it all began. It started off simple enough. The man he thought was his friend, his partner, asked him to cover up a deal that went south. And now in present day, Fusco is in the interrogation room sweating bullets.

Carter is in the other room wondering what the heck is going on. Finch calls her with his usual plea for help and she tells him to suck it. Instead, she wants something from him. She wants to be able to clone phones so she can hear what’s going on with Lionel.

She visits the guy ratting Lionel out in prison and he leaves to “have a date with a sock.” Um. Ew?

But no need, Lionel eventually confesses to her the truth. She switches feelings on him completely and does the “I don’t even know you!” overdramatics.

Carter calls John to ask what he’s going to do about Lionel. I don’t think John could care less about his friend’s impending date with handcuffs. What a dick. But I do appreciate him calling out Carter for not believing someone can change.

Lionel has no friends. As he’s walking with the cops to the site the body is buried (found by satellites that can apparently show the ass hair on a frog. Gross.) I swear I half expected him to grab a gun and kill everyone and himself in one crazy swoop.

But the hole is empty. Someone moved the body. I am thrilled to see that Carter and Bear are covered in mud.

I am not thrilled to see that The Machine is officially inflicted with a virus. Here we go.