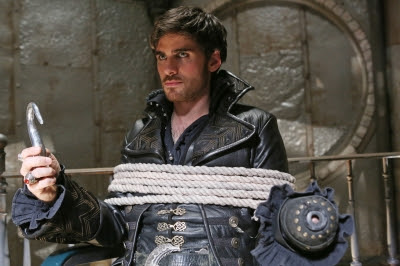 Only a few episodes left before the season finale of Once Upon A Time. In the upcoming new episode “The Evil Queen“, Regina plans a way to secure her and Henry a ride home to Fairy Tale Lane but it will come at a price. Meanwhile, Tamara and Greg finally have a chat with their prisoner Captain Hook. With this many bad guys, who is going to get their hands on the magic beans? Where will they travel to once they do?

Check out the sneak peek clips from the upcoming new episode of Once Upon A Time: “The Evil Queen.”

Edit: Check out our recap of the episode here

Once Upon a Time 2×20 “The Evil Queen” – With the aid of Hook, Regina attempts to put a plan in motion that will help transport herself and Henry back to Fairytale land. But her plan revolves around a fail-safe that was planted within the curse, which if triggered could wipe Storybrooke off the map – and kill all of its inhabitants; and Emma’s suspicions about Tamara grow. Meanwhile, in the fairytale land that was, the Evil Queen asks Rumplestiltskin to transform her into an unrecognizable peasant in order to kill an unsuspecting Snow White, with the twisted aim of earning the love and respect of her subjects, on ‘Once Upon a Time,’ Sunday, April 28th on ABC.

Tags: Once Upon A TimeThe Evil Queen
No Comments
Share
0