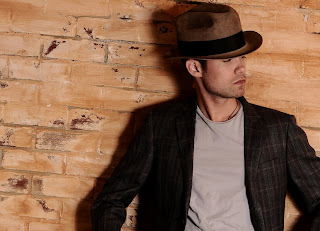 Fans will recognize Drew Seeley not only from his work in television, but his extensive work in music. Drew is an extremely talented musician who has appeared in numerous projects working for Disney and even appeared on Broadway. Perhaps best known for being the singing voice of Troy in High School Musical, he has appeared on numerous albums for Disney (Disneymania, Radio Disney Jams) as well as a duet on the Cheetah Girls 2 soundtrack that went platinum. He has starred alongside Selena Gomez and Jane Lynch in Another Cinderella Story and is most recently appearing in ABC Family’s new hit musical Lovestruck.

We got the chance to chat with Drew about his new movie, working with the cast, what’s next for him after his upcoming wedding and how Hanson helped him propose.

Check out our interview with Drew Seeley here:

Pop City Life: What was it like being a part of and working with such a talented cast?

Drew Seeley: It was great. You always want to make sure that you’re not the weak link. You’re surrounded by really talented, great actors and singers, so just staying on your game is the main thing. But everybody was so nice, from Jane Seymour to Chelsea. We all became friends very quickly and still talk and hang out. Chelsea is actually coming to my wedding next weekend, funnily enough, to give you an idea.

It was a great experience. Everyone was really cool. Who knows, they may want a sequel or something and I will be game.

PCL: Is there anyone that you would love to work with someday?

Drew: Daniel Day Lewis. I just want to work with good actors and people that I can learn from, is my main goal in all of this. I think it’s always great to not be the smartest person in the room because I don’t want to ever feel like I can’t improve upon what I’m doing. I just want to surround myself with people that are better actors than me and better singers and dancers and see what happens.

Also revealed on the conference call:

Q) What was it about this particular role that interested you to be a part of the film?

Drew: The movie was produced by Debra Martin Chase, who really gave me my first break with “Dance with Me,” from Cheetah Girls 2. So I’ve known her for a long time and hadn’t seen her forever, so it was really nice to reunite with her on this movie. Plus, I’m an actor, I just love to work. Some jobs are better than others, and this one was just a blessing in that I got to do everything that I love to do; sing, dance, and act, in one film. This is one of those ones that you hope comes around more often.

Q) I’m a big Hanson fan, so how did you end up in their latest video?

Drew: It’s one of these serendipitous things. Amy, my fiancé, has been a Hanson fanatic since she was a kid. So, she has taken me to about four or five Hanson concerts over the last five years in L.A. At first she had to drag me because all I knew was “MMMBop.” Then by the third or fourth show, I kinda got it and I’m like wow, these guys are really good musicians and I can appreciate this.

So when I decided I was going to propose to Amy, I had a friend from high school named Livy McCall, who worked with Hanson management, and I just shot her an email out of the dark, kind of who knows, maybe this will work, can you get Hanson to make a super quick little Flip Cam video and say hi to Amy or something? They made a minute video for my proposal saying yes, we checked out Drew, we approve, we think you should say “yes,” and I played it when I proposed to her and she loved it.

I guess the guys saw that and then a year later, when they were going to film this music video for “Get the Girl Back,” their new single, they reached out to me. They were like hi, we’re in L.A. if you and Amy want to be in our video. So of course we said yes and they’re almost, I would say, they’re friends now, acquaintances. It’s crazy how that worked out. But they are really, really awesome dudes. I’m such a fan. I hope their album kills.

Q)  What are the differences you would say there are between Broadway and film acting? Which one do you prefer?

Drew: Broadway is eight shows a week and the feedback you get is immediate, which is always fun. Filming is long, tedious days, and then you wait and wait and wait some more for whatever it is to come out, and then people get to see and appreciate your work. Like, Lovestruck we shot a year and half ago, so it feels like forever ago. It feels like it should have been out a long time ago.

It’s really nice that it’s coming out now; I don’t mind that it takes so long. I would probably say theater. Just because you’re with the same people for a longer amount of time, so you have more time to develop longer friendships. The feedback is immediate. And New York is such an exciting city. I really love living in New York. That was the only chance I’ve ever had to do that, but I would go back in heartbeat.

Q) What other projects are you currently working on in either music or acting?

Drew: I’ve got two movies that I’ve shot that haven’t come out yet. One is called Yellow Day and another is called Nonstop, which I’m actually filming right now. That’s fun – it’s a suspense movie on a plane, and I play a flight attendant. There’s no music at all in that, but we’re having a good time. As far as other stuff – I’m starting to get into writing, as well. I wrote my first TV pilot about two months ago. I wrote a character for myself in a half hour comedy. I’m going to start taking meetings and pitching that around town and hoping for the best. See if anyone’s interested.

Thank you so much to Drew for taking the time to answer some questions for us! Make sure to tune in to Drew’s new movie Lovestruck on ABC Family!