Once Upon A Time Season 2 Spoilers: Season Finale 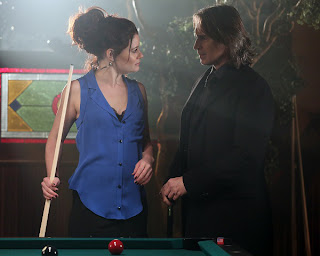 Starting this Sunday, Once Upon A Time will finally return to ABC with four uninterrupted episodes. The rest of the season is said to be a big game-changer with nothing but momentum building up to the season finale. First up we’ll see Belle’s new identity and just how much it differs from the sweet, library loving girl in blue. The rest of the season will also reveal Tamara and Owen’s agenda (hint: it doesn’t look good), the return of Captain Hook, and the possibility of leaving Storybrooke now that the magic beans are growing.

Check out the detailed spoilers on the upcoming four new episodes of Once Upon A Time:

Tamara and Greg’s mysterious agenda will be made clear over the next two episodes (“That reveal takes off like a rocket,” effuses Horowitz), and as hinted in the last episode, Regina — having deduced Greg’s true identity — “will be front and center in that story,” Kitsis says. “There are not a lot of coincidences here…,” Horowitz says with a smile. “There’s a reason for all of the connections we’ve revealed so far — and some we have yet to reveal.” (And yes, Kurt Flynn’s fate will be divulged by season’s end.)

Elsewhere as Season 2 builds to its climax (airing May 12 and titled “And Straight On Till Morning”), Captain Hook — who (reportedly) went MIA soon after stabbing his “Crocodile” in NYC — will resurface “very soon, and under surprising circumstances,” Kitsis teases. The pirate’s past with Neal/Bae will then be detailed in the penultimate episode, “Second Star to the Right.” (“We can’t read every theory out there on the Internet, but this [connection] has so far been kept secret,” Kitsis offers.)

Episode 21 will also let loose with the Rumplestiltskin/Bae “game-changer” that Robert Carlyle alluded to at last month’s PaleyFest panel. “I know what he was hinting at,” Kitsis allows, “and yeah, it’s really big.”

My sadness about August is still alive and well (although he is not) but I’m actually a bit curious about Captain Hook and this new game-changer with Rumples and Bae.

What do you guys think it will be?