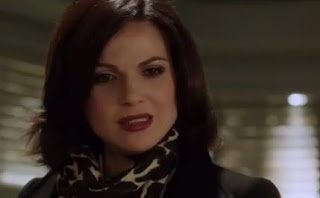 This episode took my heart and stomped on it from every angle. I felt like Cora had grabbed it herself. Boy does this episode set up some big things to come. As a fan, I’m getting a little nervous.

Check out our recap of the biggest moments from tonight’s new episode of Once Upon A Time: The Queen is Dead.

Little Snow White is back. She’s so cute. But she’s a little brat, talking down to servants and such. Snow’s mother explains to her daughter the need to always be good and pure of heart. It’s a major theme of the episode and, I would assume, the rest of the season. Just when exactly will Snow snap? Instead of celebrating her birthday, as we all know, Snow’s mother dies. What we don’t know, is why.

Snow runs to visit the Blue Fairy to wish her mother’s illness will get better. She tells Snow that the only way to do so is with dark magic. She must trade the life of her mother for someone else. Snow is pure of heart and cannot do it.

Speaking of being a little brat, have I mentioned how much I can’t stand Henry? He compares Emma to a slice of pizza, choosing to like the pizza more because it doesn’t lie. Ugh.

Hook gets his hook back and makes his way to the Big Apple. How did he get there so fast? Traveling by ship isn’t exactly a fast method of travel. Either way, he stabs Rumple in the chest with a poisonous hook and now our gang in NYC need to get back to Storybrooke fast.

Among the things we learn in New York this week: Neal knows who Hook is and can drive a ship. He’s been to Neverland (which explains why he’s not super old) and I must wonder if he was a Lost Boy? Or, dare I say it, Peter Pan? Also, he’s got a girl. A fiance actually. I was hoping his reveal would be that he was bunking with August.

Back in Storybrooke, Snow is determined to find Rumple’s dagger before Regina and Cora do. She cheats though and just asks Rumple to tell her where it is. Clever hiding spot too. Behind one of the hands on the clock tower. Snow and David reach the dagger but are immediately blackmailed by Cora and Regina into giving it over to them.

Regina is holding Johanna’s (the maid that Snow loves from her childhood) heart in her hands and forces Snow to give it over. Cora confesses to posing as the Blue Fairy to try and darken Snow’s soul and Snow discovers that it was Cora who poisoned her mother. After this, I really expected Snow to just snap and plunge the dagger into Cora’s heart. But alas. Not yet anyways.

She hands over the dagger to Cora. And Cora tosses Johanna out of the clock tower window and kills her anyway. OMG. I hate Cora so much. I can’t wait till someone makes her pay.

How long before Snow surrenders to the dark side? Not long. Snow’s new mission in life is to kill Cora.

Tags: Once Upon A TimeThe Queen is Dead
No Comments
Share
0