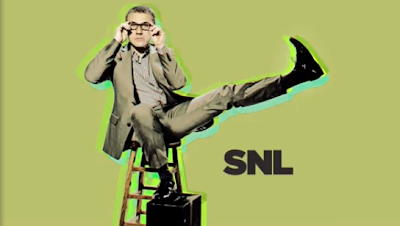 After last night’s episode of Saturday Night Live, I am now convinced that Christoph Waltz is the cutest thing ever. It’s always a question when a host is revealed to be a dramatic actor but I thought, given the writing that’s been on a bit of a decline this season, he did a great job. There were little moments here and there that jumped out at me and made me laugh out loud. Some sketches were of course, better and funnier than others so we’ve picked out our favorites of the night.

Check out video of the best and the worst from last night’s episode of SNL here:

I don’t know why people complain about this sketch. It’s very simple in why it’s funny. Fred Armisen makes an ugly woman. And when he flashes his junk at his cast members to the point that Bill Hader is white knuckling a glass of wine to keep his laughter down, you know it’s a good one. And also, I’d probably react the same way if Christoph Waltz kissed my neck.

Djesus Uncrossed: There’s no question that this skit was the most talked about of the night. Why? Because it was hilarious. I’m going to let the clip speak for itself.

This skit was pretty standard but Christoph popping up as an excitable virgin made Kenan and myself giggle a few times.

By now everyone has heard about the Carnival cruise incident.

You can check out the rest of the videos from the night, including the full episode over an NBC.com here What did you think of last night’s episode? Was Christoph a good host?