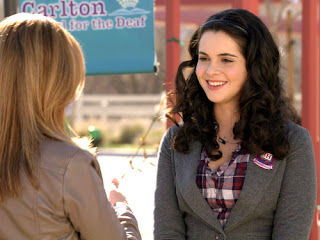 Switched at Birth returns this Monday at 8pm on ABC Family with the highly anticipated second season of the hit drama. With a cliffhanger season finale, the show left fans on the edge of their seats wondering what’s in store when the show returns. Vanessa Marano sheds some light on a few things..without giving too much away…in this new interview. Among the things fans are wondering: Does Angelo have another kid? What is he going to do with all that money he just inherited? What about his marriage to Regina? And how are things between Bay and Emmett?

Check it out after the cut!

TVLINE | After that lovely scene by the car in the season finale, where do Bay and Emmett stand?
She’s forgiven him, which is nice. But she wants to be friends. She’s not ready to be whatever they were again, and he is ready. So when you have one person who is ready and one person who’s not ready, something’s gotta give. I just don’t know what.

TVLINE | Last time we talked, you said you like Emmett and Daphne together, and then Katie [Leclerc] told me she likes Emmett with Bay. Is that still the case?
That’s 100 percent still the case. I don’t know how Katie can still like Bay and Emmett together. I’m like the only person in America who shares this belief that Bay and Emmett should not get back together, because he cheated on her and that’s awful. But I’m the only one – cast [and] crew included and people who watch the show. So I stand alone pretty much. [Laughs]

I’m with her actually. I don’t think cheating should be forgiven so easily. What do you think?

TVLINE | We also have to talk about Angelo and the baby bombshell. Is it definitely his?
I can’t tell you that! But I will say this: Angelo clearly likes taking paternity tests. This will be his second paternity test.

TVLINE | What about the fact that he was rewarded all this money? It tends to change people, so how’s it going to affect the family?
With Angelo, that’s the whole thing. Money does tend to change people. Is it going to change him for the better though? He’s not a great person to begin with. He’s a person who’s constantly trying to change himself for the better. Everybody’s always on edge like, “Oh, well, how’s that going to go down? Can we trust him?” That’s the whole theme of the season. Now that he has the ability to give the girls the world, is he to be trusted? Or is that even more dangerous?

I wonder what he’ll do with all that money? Give it to the girls? Do they even need it? Will Regina finally get her salon? He needs to get himself a good durham business lawyer to get it all organized.

Check out the rest of what Vanessa had to say in the interview over at TVLine and post your hopes for the new season below!