Once Upon A Time Spoilers: Season 2 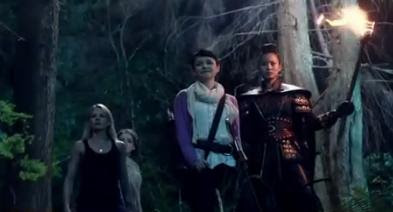 As we await the return of our beloved fairy tale drama Once Upon A Time, here are some spoilers to hold us over until January. When the show returns on January 6th with The Cricket Game, will a beloved fairy tale character’s life be in danger? And will Regina be to blame? Along with that episode description, you can check out the next three descriptions and a handful of upcoming episode titles.

2×10->The Cricket Game
EMMA THINKS REGINA MAY BE INNOCENT OF MURDERING ONE OF THE TOWN’S MOST BELOVED FAIRYTALE CHARACTERS, AND SNOW WHITE AND PRINCE CHARMING SET ABOUT PLANNING THE EVIL QUEEN’S PUBLIC EXECUTION, ON ABC’S “ONCE UPON A TIME”

“The Cricket Game” – Regina is accused of murdering one of the town’s most beloved fairytale characters — but only Emma senses that she may be innocent. Meanwhile, back in the fairytale land that was, after capturing the Evil Queen, Snow White and Prince Charming set about planning her public execution in order to rid the land of her murderous tyranny.

2×11->The Outsider
MR. GOLD ATTEMPTS TO DISCOVER IF HIS SPELL WILL ALLOW HIM TO CROSS THE STORYBROOKE BORDER AND GO IN SEARCH OF HIS SON, AND BELLE MEETS UP WITH MULAN TO SLAY A FEARSOME YAOGUAI, ON ABC’S “ONCE UPON A TIME”

“The Outsider” – Mr. Gold finds an unwilling test subject to see if a spell he has concocted will allow him to cross the border of Storybrooke — without losing his memory — and go in search of his son, Bae; Belle stumbles upon a vengeful Hook in the Storybrooke harbor whose main goal is to eradicate Rumplestiltskin; and Mary Margaret and David go house hunting in search of a bigger place to live. Meanwhile, in the fairytale land that was, Belle meets Mulan as the two set out to slay a fearsome beast called the Yaoguai, who has been ravaging the land.

2×12->In the Name of the Brother
AFRAID THAT THE STRANGER MAY HAVE SEEN MAGIC BEFORE HIS ACCIDENT,SOME OF THE STORYBROOKE RESIDENTS WANT DR. WHALE TO LET HIM DIE SO THAT HE CANNOT EXPOSE THEIR TRUE IDENTITIES TO THE WORLD, AND VICTOR TRIES TO PROVE TO HIS FATHER THAT HE CAN BRING BACK THE DEAD, ON ABC’S “ONCE UPON A TIME”

“In the Name of the Brother” – Dr. Whale is tasked with mending Hook’s wounds and performing surgery on the stranger whose car crashed upon entering Storybrooke. But some of the townspeople fear that the stranger may have seen magic — which could expose their true identities to the world — and think that leaving him to die would be the best solution. Meanwhile, as Mr. Gold tries to reunite with a despondent Belle, Cora attempts to reunite with daughter Regina; and in the land that was, Victor desperately wants to prove to his disapproving father that he can, indeed, bring back the dead.

Oh, man. I hope nothing happens to Archie!

Tags: Once Upon A TimeThe Cricket Game
No Comments
Share
0