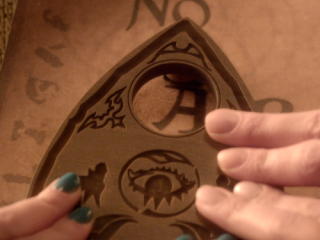 This episode of Pretty Little Liars was all over the place. Whenever they would devote time to a new topic, it would cut away to a new one before you even realized what happened in the first one. Thankfully, at least, the episode was saved by a big reveal in the end and Jason jogging down the street.

The ending gave a riddle and a code for the girls to solve. Click here for the answers:

Hanna is the big victim of the week as she is the new suspect in Ali’s murder. Wilden drops by to let her know they want to test her blood to see if it’s a match for the sample found on the bracelet. A also found their way into Hanna’s house to leave a Ouija board on her counter. The same board that Hanna put in Ali’s coffin. To protect her friend, Aria turns to Mona for answers. Mona’s visits are supervised so they don’t get much out of her except “It wasn’t me.”

In boring and not that interesting news, Ella goes on a blind date with the pastor who was dating Hanna’s mom last week. Man. He sure gets around. But it’s all very brief because Ella has working eyes and those eyes notice how hot the barista behind the counter is. I approve.

The girls run into a girl named Cece, not Babcock, who acts and talks just like Ali did. Apparently they had an “intense” Summer and she used to date Jason. Why her friendship with Ali was intense? We don’t know. But we know she doesn’t take any crap. She calls up Jenna and tells her to back off Nate. Just for giggles. Did Ali learn everything she knew from this girl?

Also in town, is Ali’s dad. He is a terrible actor. He’s really angry and he really hates Hanna. Apparently, because she’s stupid, Hanna ran and told Ali’s mom that she was still alive after thinking she saw her during that Ouija board game. 3 days later her body was found. This family is messed up. Jason is grieving because he feels he’s a dumbass so he breaks his sobriety and gets into a hit and run. It’s a run because Spencer pushes him over and drives his car away..leaving hers completely open at the scene of the crime.

Aria and Hanna go back to see Mona after hours and Hanna relives the day Ali’s dad screamed at her. During the flashback, Mona is teaching Hanna a game to talk about people without them knowing it. You say a random sentence and use the first letters to reveal what you’re actually saying. So “She Lives Under Trees” would be SLUT. Mona escapes from her room to the abandoned children’s ward where they find her sitting and playing with some more creepy dolls. This town has too many of them.

Of the gems Mona spews:

Where Were We? Maya’s Away Sleeping Sweet Until Garrett’s All Rosy Count On Me = www.Massugar.com

No One To Save Ali From Evil = NOT SAFE