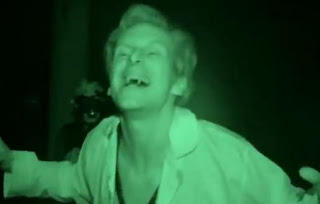 This season of True Blood has been pretty fantastic. Past seasons have been kind of a mess and while I agree that they have too many storylines going on, this season, especially with the fantastic one liners, have been a great improvement. That’s why it pains me to say that this episode started off great but faded to “I can’t” territory towards the end.

So our main girl Sookie doesn’t get a lot of airtime tonight. It’s nice to see a bit of the old her in what we do see. She learns that because she is only half faerie, her magic is depleting because she’s using it so much. Once it runs out, she will be human. Excited at the prospect of being normal again, she tries to use up her magic as fast as she can. Is it smart to give away her only weapon? Vampires will still chase her and want her blood.

Arlene watches her wedding video in that masochistic way we all treat ourselves when we’re hurting. The video itself is cute and allows us to see versions of characters we haven’t seen in awhile. Like hey, Jessica is still nice and with Hoyt and Jesus is still alive. But this Terry storyline is just such a waste. I liked him better when he was just on the side hanging out with his armadillo. When Terry tries to commit suicide and his buddy says “that’s for Muslims”, I must have double taked so hard I hurt my neck.

In other sidebar news, Tara is now up on the stripper pole looking fine, her mother disowns her, and she gives Pam a hug. Alcide is training for a fight but won’t drink V and instead just makes out in some hay. He’s shirtless so I really have no complaints or anything else to add here.

Lafayette searches for the rest of Jesus’ body and finds it in Mexico with his crazy relative. This whole scene was just disgusting. I am not here to see a head on a chair, or Lafayette’s mouth literally sewn together, or a pregnant chick stab the crap out of said crazy relative 57 times. I was happy when it was over.

Hoyt is now buddies with the hate group and admits to them that he now hates Jessica. I can only imagine that she is their next target. It’s so obvious that there is only one way for Hoyt’s storyline to go. He was such a great character with a ton of promise and he has been completely run into the ground. I miss the days of him with Jessica. Jessica is not making many friends. In fact, she pisses Jason off so much by kissing him with blood on her lips that he shoots her in the head. She’s a vamp though so don’t worry. She healed.

Salome reveals that she was the one who dug up Russell and wants everyone to join her, Russell, who claims he’s born again, and Nora in drinking the blood of Lilith and pillaging humans in New Orleans. Eric and Bill believe nothing will happen to them by drinking it but it’s not long until they’re high on the streets of Louisiana draining a bunch of humans. Godric shows up (yay!) to tell Eric how wrong this all is. I missed him.

And then, in the biggest ridiculous moment of the night, Lilith appears. Out of a drop of blood or something, a very exposed and naked woman appears to cheer them all on. I can’t tell if they’re all just high or if it’s really happening but I just can’t at this scene.

Andy: Jesus Tits on Christ this has got to be the worst night of my life.

Sookie: Fuck you, I’m depleting.
Jason: Plug her in and charge her back up!

Alcide: Your son don’t have a grave because ya’ll ate him.

Watch the preview of next week’s episode, Somebody That I Used To Know here