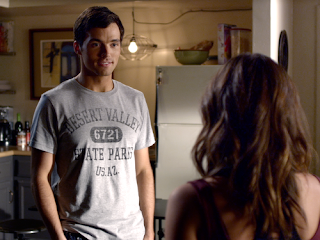 This was a really good episode of Pretty Little Liars. Not only did it have Jason (he’s so pretty) but things actually happened and moved forward. There was suspense and that always makes for a great episode.

Hanna and Spencer hatch a plan to leave a new note for A in the hospital room so they can catch them in the act. But with Garrett’s case falling apart, time is more important than ever.

Whatever physical evidence they had against Garrett isn’t holding up in court and it’s only a matter of time before his case is thrown out. Hanna heads to the church dance to wait for an appearance by A and Spencer enlists the help of her gorgeous brother in finding April Rose. It’s not a person. It’s an antique shop. And look, there’s yet another creepy old woman. What is it with this town? Inside, they find an anklet Alison never took off. Jason flashes some money at the guy behind the counter and they immediately hand it over to the police.

Unfortunately, it does the exact opposite of what they were hoping for. The blood on the anklet doesn’t belong to Garrett. It belongs to someone else. They inadvertently prove his innocence. With a final text from A telling Spencer that Garrett never killed either of them, Spencer completely breaks down. I love Troian sometimes. Her acting is just insanely good. I can really feel her pain here.

I really want Ezra to have something to do with everything and have it be a shocking reveal in the series finale of the show. But now, I don’t know. He’s becoming suspicious. Is he red herring material? Aria finds a huge bag of cash in his sock drawer and freaks out. He tells her he sold his grandfather’s car because he’s poor and tired of eating ramen. Just when I accept that his suspicious-ness is over and settle in to being depressed, Ezra glances nervously back at the drawer like he just told the biggest lie of his life. YES. Please.

We have quite the love/hate relationship for Wilden. On the one hand, he’s such a jerk. I find myself imagining Hanna beating him with one of her heels a lot. But I also enjoy his creepiness on the show. I mean, if I had to choose who I’d rather see tonight it would be him..and not Holden who is apparently still alive and weird. Only now, we can add him to the suspicious list.

Emily begins to have some more flashbacks from “that night” and remembers someone’s identity more clearly. Holden was at a diner with her. Apparently he goes to raves with one of Emily’s ex girlfriends. Maya? Or Paige?

Watch the preview of next week’s episode, Crazy, here

Tags: Pretty Little LiarsThe Remains of The A
No Comments
Share
0