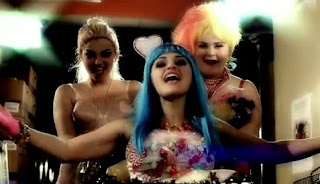 It’s time for the cast of The Glee Project to get theatrical. The contenders take on Theatricality while performing their version of The Pussycat Dolls’ When I Grow Up.

The song itself is terrible and vocally, doesn’t do anyone any favors. Visually, the cast looks great prancing around in different looks. I didn’t even recognize Nellie! Alli is the featured performer this week and she sounds great.

Watch the video here:
Update: Read the recap and results of the episode here