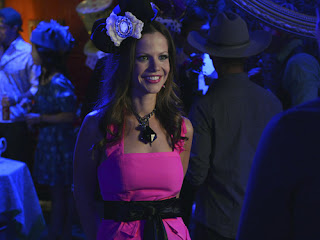 The girls of Pretty Little Liars are left wondering what A has planned next when Jenna suddenly reveals to the world she can see again just in time to have a big birthday bash. Coincidentally, this party will be happening the same night that Garrett is being let out of jail. What do they have planned?

Jenna has apparently invited all of Rosewood to fit into Emily’s coffee shop for her party. Even Paige and Ezra get an invite. How odd. Not invited, probably because he’s a huge creeper, is Lucas. He’s spending his days now kicking doors to photography studios and throwing tantrums in the street. The photographer in charge of the party says she fired Lucas for developing his own stuff. What was he developing? Whatever it was, he really wants it back. He left his negatives in the studio and Aria sweet talks her way inside to get a closer look.

Hanna is shocked when the jacket Emily was wearing “that night” turns up at the rummage sale she’s working at. Didn’t they burn all those clothes? Another token from that night is the flask Emily was drinking from. Paige finds it and Emily happily gives what’s left in the bottle to her. Paige, moping about Emily not loving her back, drains it and gets sloppy and drunk at the party until she falls and has to go to the hospital. Her test results show she had traces of a sedative in her blood. If that was in the flask, why weren’t the other girls drugged too? Didn’t they all drink from it that night?

As Emily is describing the pills to Aria, she’s shocked when she realizes they’re in her hand. She just pulled them out of a negatives canister from Lucas’ bag. Really??