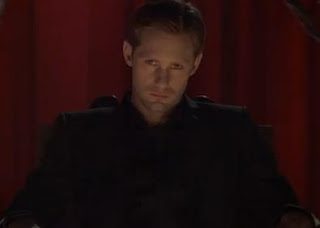 My biggest disappointment of the night had to go to the lack of sexytimes between Sookie and Alcide. Just as they get to the bedroom, Sookie responds to Alcide’s eagerness by puking all over his shoes. If that weren’t bad enough for the burly werewolf, Bill and Eric have shown up to ruin the party.

Sookie teams up with Bill, Eric, and Alcide to find Russell’s currents whereabouts. The clock is ticking because Eric and Bill are scheduled to be terminated at dawn. With the help of the poor dude who witnessed him being dug up, they track him down in an asylum. At night? That sounds safe. All the bodies hanging from the ceiling looks friendly too. Before they can get close enough to stake Russell, a mysterious something or someone attacks Alcide in the hall. Cliffhanger? Ugh.

Tara begins to adjust to her new life as a vampire with the help of Pam’s closet and her new BFF Jessica. Their friendship is short lived when Tara is dangerously close to draining Hoyt, prompting Jessica to initiate a catfight to rival catfights at Fangtasia.

In Supernatural and unexplained new, Lafayette panics when the demon in him refuses to go away and begs Jesus’ spirit to help him. What he gets in return is..Jesus’ head. With his mouth sewed shut. What the heck?

Terry and his friends realize they were cursed by one of the dying people they killed in the war and are being stalked and hunted by..a fire demon? I liked Terry when he wasn’t supernatural and enjoyed chilling with his armadillo.

Sam goes to check on Luna and Emma after his friends were killed. As he leaves, he himself is gunned down by the same people. Luna runs out to see what’s going on and is also shot..and probably killed. It’s not looking too good for her. Little Emma transforms and runs away.

Who will make it to the next episode?

Watch the preview of Episode 6 of True Blood: Hopeless here.

Eric: New York City smells like pee and the people are rude.