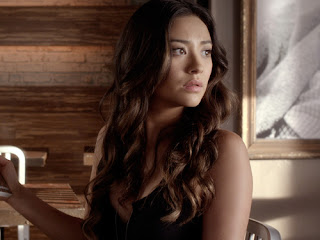 The most important thing you need to know about tonight’s new episode of Pretty Little Liars is that Jason is back. And he’s still beautiful. He’s pissed and he’s bringing cash with him this time. He’s pissed at Mrs. Hastings, who apparently decided to go to Paige’s hair stylist this week, for defending Garrett. He’s decided to offer a $50,000 reward for any information he can get about Ali’s remains. There are so many suspects in this town. Is one of them under the Hastings roof?

Recap of Birds of a Feather:

The rest of the episode was kind of a dud. Emily gets a new job at like, the Rosewood Starbucks or something and Maya’s cute cousin comes to town to see her. I can’t really see where this plot could go but I never liked Maya so I’d rather they didn’t waste half an episode on her. Aria decides not to tell Ella that Byron is dating again, so she creates an online dating profile for her instead. Perhaps the Detective is available? Because he’s back in town and he’s still creepy.

Hanna spots him at Radley coming to visit Mona who, apparently, can suddenly no longer have any visitors. Freaking out on Caleb probably had a little to do with that. Why hasn’t Wilden been fired yet? He’s so creepy. And horrible at his job. Why does he want to know about Spencer’s lake house?

The girls decide to investigate Melissa about being the Black Swan when they realize she’s been faking her pregnancy. They go to her house in Philly and hide in the closet until she leaves. They leave after finding a black feather. I was kind of hoping they would find something fishier. Like, A on speed dial or something. Spencer confronts her and she admits to being the Black Swan. She says she was blackmailed and the person knew she was faking the pregnancy. She lost the baby the day after they found Ian’s body. Garrett also knows and is, somewhat, the reason Spencer’s mom took the case.

Hanna decides to tell Caleb the truth about A starting to harass them again until she gets a text. A tells her they can be anywhere and shows her a picture of a car crash in Montecito. If you recall, Montecito is where Caleb’s mother is. He walks in and mentions that someone ran his mom off the road. Fearing his safety, Hanna backs out of telling him the truth. He’s sick of everything and breaks up with her. I’d feel bad for Hanna but something tells me Wren can make her feel better.

So, A was out of town this episode? And Ezra was nowhere to be found? Hmm.

Jason writes out a check for 50 grand and makes plans to meet someone with knowledge. Be careful! Bring a bodyguard or something. A is hanging out with their laptop changing Mona’s visitation rights. Would Wren have that access?

Pretty Little Liars returns in two weeks. Watch the preview of the next new episode here

Tags: Birds of a FeatherPretty Little Liars
No Comments
Share
0