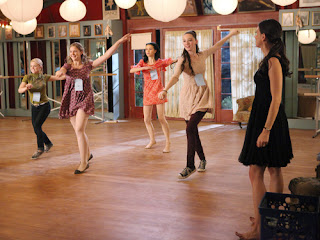 ABC Family advertised the premiere of Bunheads as the “Most Anticipated” new show on the network. I wasn’t impressed by the previews and I can’t take their opinion seriously when they also have numerous positive things to say about The Secret Life. That being said, Bunheads was not at all what I expected.

The show centers on a frustrated Vegas showgirl named Michelle (Sutton Foster) who desperately wants to dance and use the skills she’s learned over the years. Unable to land any auditions, she’s completely fed up with her life and the fact that Cameron from Ferris Bueller’s Day Off (Alan Ruck) is stalking her with beautiful jewelry and flowers. Of all the problems you could have, that isn’t a bad one.

Hubbell is a lonely guy with a crush who would love nothing more than to take her away from all her problems and take care of her. Can a rich guy who lives on the ocean propose to me out of nowhere? I’m serious. I’ll take applications.

In the real world, this guy would probably be a serial killer who would love to chop her up and put her in his trunk. But this is ABC Family. He actually loves her. Despite actually telling him she doesn’t love him, she marries him and moves with him to his small, quiet town.

It’s here that I’ve mentally created a drinking game. Take a shot every time you notice a Gilmore Girls parallel. I’ve noticed quite a bunch so far.

There’s the harp player from season 1 (Alex Borstein), Gypsy, the small, eclectic town, the Lorelai-esque one liners, and of course Hubbell’s mother, Fanny, played by Emily Bishop. And if I’m not mistaken, the song that plays as Michelle walks through town is the exact same guitar strum and lalas we heard on Gilmore Girls. Or at the very least, the same singer. It’s like they’re not even trying to hide the similarities. But Gilmore Girls is one of my favorite shows so I’m not at all complaining.

Also, in the corner of my eye I notice the piano player. Is that the random piano guy from Glee? Every time someone says Hubbell I think of The Way We Were.

Michelle struggles with the whole town thinking she’s a stripper and Hubbell’s mother hating her. She walks in on Fanny’s group of girls from her ballet class. They’re made up of a handful of girls that lack confidence. There’s one who hates her body type, there’s another who hates her boobs, and then there’s the token bitchy girl. Michelle dances with them for awhile and inspires them and it’s all lovely. Then she bonds with Fanny and they too go dancing in a bar.

Then a townie walks in with a cop to announce that Hubbell died in a car crash. Well. That came out of nowhere. I was actually really enjoying the episode up until that moment. I thought Alan Ruck was great as his character. Now I’m just depressed.

What did you think of the premiere? Will you be tuning in next week?

Watch the preview promo for next week’s new episode, “For Fanny” here