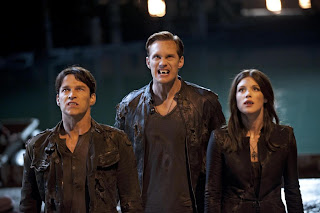 Since I’m not much of a Twilight fan, my year has been unsurprisingly Vampire-Free. Thankfully, that all ended tonight. HBO’s hit drama True Blood returned with an episode that calmed any doubts I had about the season continuing to deliver. There was suspense, some blood shed, some tears, and some butts. All the things that make us love True Blood.

The season premiere, Turn! Turn! Turn!, picks up exactly where the season finale left off. Actually, a few minutes back in time. Here is our recap of Season 5, Episode 1:

A sleeping and already grieving Lafayette is awakened by the sound of a shotgun going off. He runs downstairs to find Sookie crying over Tara’s body. As if their night wasn’t bad enough, Pam shows up looking for Eric. The two of them beg her to save Tara and turn her into a vampire. Is that necessary? Would a little vampire blood cure her? Perhaps the fact half her head is missing presents a problem. This is something Pam notices and expresses a concern Tara will return “F*cktarded.” Well, that’s a new one.

Pam agrees to help them if Sookie owes her a favor. I wonder how she’ll cash in her debt?

Bill and Eric are busy cleaning up the mess Nan’s bloody body parts have left behind. Their plans to flee from The Authority are shot to hell when they are captured anyway. They escape capture with the help of an undercover member of The Authority that Eric seems to know well. Very well. I don’t have to wait long to wonder who she is while they’re making out. Eric announces that Nora is his sister. Um. Ew? They’re not blood siblings so I guess that makes the sex scene that follows okay. Kind of. Maybe. Godric was also her maker. The Authority catches up with all of them once again and they are captured. Many episodes of Law and Order: SVU tell me they are not in for an easy ride. RIP Ike Applebaum, Eric’s alternate identity.

Now on to one of the most anticipated moments of the night, at least for me. The return of Steve Newlin. He’s so precious in his little sweater! Steve Newlin glamours Jason to let him inside so he can calmly..come out to him as a gay vampire. WHAT? Are all my True Blood dreams coming true?! He tells a cute little story about how his new immortality has him embracing who he is and how jealous he was that his wife got to sleep with Jason. Unfortunately for him, Jason doesn’t bark that way. Before an angry Steve can sink his teeth into him, Jessica shows up, in lingerie nonetheless, to save him so Jason can kick his butt out. Then they have sex. I feel like that’s all Jessica does lately. They really need to give her a storyline.

Over in werewolf land, Sam takes the blame for Marcus’ death and is taken by his angry pack. Sam brings them to his body and Alcide shows up, unfortunately wearing a shirt, to tell them the truth. I really didn’t need to see a wolf eating intestines.

Terry’s military buddy, Patrick, shows up to get a glimpse at his new life. Since it’s True Blood, I expected him to be hiding a secret but it looks like Terry is the one not being truthful. He isn’t especially happy to see his old friend and his past is the reason why. When Patrick learns that Arlene and Terry lost their home to a fire, he confesses that four people from their group in Iraq went through the same thing. And now they’re dead. He thinks someone is doing it on purpose because of “what happened that night.” I thought it was the creepy baby doll? Can’t we keep Terry innocent?

Sookie and Lafayette’s day just keeps getting worse. Alcide shows up to tell Sookie about Russell Edgington still being alive and being on the loose. He wants Sookie to come stay with him. A newly head-shaven Laffy comes into the room to demand Alcide leave them alone. He’s just about had it with supernatural beings. Especially because Jesus’ body has disappeared.

Pam comes out of the ground to an expectant Sookie who is heartbroken to see that Tara didn’t come up with her. She digs and digs and sees Tara’s dead body. Just as her and Lafayette start to cry (and make me cry with him) because it didn’t work, Tara zips on out of the hole to attack Sookie. The episode ends. Damn you cliffhangers!

Pam: I am wearing a wal-mart sweatsuit. If that doesn’t show team spirit, I don’t know what does.

What did you guys think of the episode? What is going on with Tara? I thought it was a fantastic return for True Blood. I can’t wait for the rest of the season!