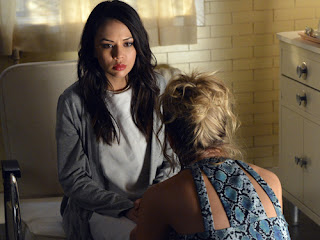 The girls are going back to school and that can only mean one thing. So many people that hate them in one place? They need to watch their backs. And if Garrett is telling the truth, they really need to watch their backs. In the promo preview for the episode “Blood is the New Black,” Garrett tells Spencer that “someone close to them has them completely fooled.” I can’t help but pray he’s talking about Ezra. This time last year, I would have guessed Mona but..she’s already in the loony bin. Now that the girls realize she isn’t working alone, who do they need to be afraid of?

Here are the video sneak peeks of Season 3, Episode 2, next week’s new episode of Pretty Little Liars: Blood Is The New Black.

Don’t forget to check out our recap of the season 3 premiere “It Happened That Night.”

If you need to catch up on the first two seasons, they are now both out and available on dvd. Check out these coupons from amazon.com and pick yourself up the dvds to relive the suspense over and over!

“Are you talking about Jenna?” Because that was the first person Spencer suspected Garrett is talking about in this clip, I’m gonna go ahead and assume that’s not the case. (Please be Ezra. Or Wren! He was kind of suspicious in the last episode.)

“Is it just me or is Jenna blinder than she was last year?” LOL. Jenna isn’t a good actress.
Team Ella.

Who gave them the necklace? Self flushing toilets are a pain in the ass.

Does Caleb have something to worry about? Are there sparks between Wren and Hanna?

Ew! Is someone sending the girls teeth??

You can also check out the previews for the episode, including the creepier and, let’s be real, cooler, Canadian promo video here. They always get the better previews.

Who do you think is the Black Swan? What does she have to do with the girls and Alison? Why is she hanging out with Lucas and Jenna? If Lucas really has turned against the girls, what did they do to him to deserve it? Would he really want to help Mona?