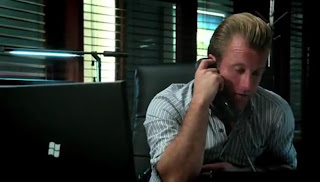 Steve succeeds in his mission in Japan. Kind of. He manages to get Wo Fat into custody to bring him back to the US. What he doesn’t know is that Wo Fat is probably happy to have Steve protecting him for awhile. The Yakuza want him dead. Why? Well it probably has something to do with his blood stained bathroom. At first, I worried about Joe. But it looks like he killed Hiro Noshimuri.

This makes things awkward for Kono. The mystery man she’s been dating? It’s Hiro’s son, Adam. I approve of all of these shower scenes. He is HOT. But can she trust him?

I’ve missed the Steve and Danny bromance so much. When Steve finally calls Danny to check in, Danny calls him babe and asks what he’s wearing. Cargo pants! LOL. I love that they give the fans what they want. Or what I want.

Steve is forced to land the plan he’s on with Wo Fat in the jungle after the guards turn out to be dirty. Wo Fat escapes and kicks Steve’s ass when he wakes up. This is painful to watch. I understand he’s rusty but come on Steve. Eventually, Steve takes him out with like, a stick, and continues his trek through the jungle. We learn that Wo Fat has been working with the CIA and the Yakuza is involved. They’re trying to intercept Wo Fat from Steve. Chin has to go and have a chat with Adam about everything. I still don’t trust this guy.

Turns out I can. Adam has been sent his father’s body parts one by one and knows that Wo Fat killed him. He wants his revenge. And he doesn’t want to hurt Kono. Danny is abducted by the CIA so he doesn’t get in the way. Ugh. His face when he hears his buddy is in danger. He loves him. Danny escapes just in time to help Steve when he arrives with Wo Fat. Adam shows up with the CIA and a bunch of goons with guns. Adam doesn’t shoot Steve but Kono shoots the CIA jerk when he tries to kill him instead.

Steve happily places Wo Fat in prison. Why do I feel like he’s happier there?

Watch the preview of the season finale