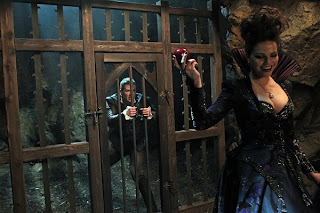 This episode starts off with Regina’s worst nightmare. She’s having dinner with a less than enthused Henry (but really, what else is new?) and I’m really distracted because he has mustard all over his face and he doesn’t seem to realize it. The entire town is at her door with torches and pitchforks ready to let Emma slice her to pieces because they remember. She wakes up from her dream only to have it be one step closer to a reality. Her apple tree is dying. Is this a sign that the curse is weakening?

Elsewhere in Storybrooke, Emma is trying to drive Henry out of town. He veers them off the road and begs her to stay. She’s the “savior.” She sounds like Jesus at this point. Jesus/Emma agrees to stay. For a little while at least. Regina believes her curse is in trouble and goes to Mr. Gold for some help in getting rid of Emma. He’s not interested. He wants the curse to be broken. He has Belle and his son to think about. Regina turns to a familiar face for help instead: Jefferson. He’s so attractive. He should be a regular.

In Fairy Tale Land, The Queen shows up at Charming’s beheading and strikes a deal with the King to take him and make him suffer on her own. What a friendly group of people. She wants to use him to end Snow White. Aware that Charming is being held in a dark dungeon, Snow, Red, Granny, the dwarfs, and a slew of other magical creatures, are working together to storm the castle. When Snow arrives, she discovers that Charming is being held inside a magic mirror. The Queen tells Snow to meet her where their war began if she wants to save her prince. We all know how this is going to end. Regina confronts Snow about Daniel and blackmails her into taking a bite of the apple.

Regina strikes a deal with Jefferson and gives him back his hat. It’s a pretty hat. She wants him to use it to take care of Emma. In return, he will be granted a fresh start with his daughter. How exactly? I mean, if Regina has hardly any magic left and she just threw it all into this hat, how can she make anymore promises? There is only enough magic to bring something back from their world and not visit it. That’s enough for Regina. She brings back the poisonous apple that she used to end Snow White.

Back in Storybrooke, Regina bakes the apple into the weirdest, undercooked turnover I’ve ever seen. Not very appetizing. When Emma shows up right on time to offer to leave town for Henry’s benefit, Regina offers her the treat to take home. When Henry shows up at Emma’s apartment to try and stop her from leaving, he does the only thing he can think of to make her believe. Once he spots the turnover, he takes a bite. Down he goes.

This episode wasn’t amazing but it was a definite setup for what I hope will be a fantastic finale. There wasn’t nearly enough Rumply in this episode. I hope that changes next week. Maybe we’ll get some more of him and Belle?

Check out the preview of the season finale here

Tags: An Apple Red as BloodOnce Upon A Time
No Comments
Share
0