May 2, 2012 Posted by Noelle Spoilers No Comments 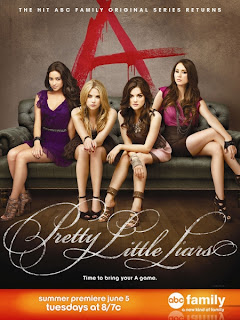 As of today, we are a little more than a month away from the season 3 premiere of Pretty Little Liars. The premiere will feature a bit of a time jump from where the season finale left off. After the reveal of A and the death of a friend, the girls reunite after going their separate ways for a few months. Check out the episode description of the third season premiere of Pretty Little Liars.

“A summer has passed since Aria, Emily, Hanna and Spencer found out about Mona being ‘A’ and Maya’s death…. Each of the four girls spent their summer in different ways – Aria taking a photography class, Spencer taking college courses at Hollis, Hanna taking cooking classes with Caleb and Emily building houses in Haiti. But… with post-traumatic stress, anger and the acquisition of more secrets the four Liars are anything but fine. Now all back together and coming upon the second anniversary of Alison’s disappearance, the girls find themselves back on the defensive when a shocking event rocks Rosewood.”