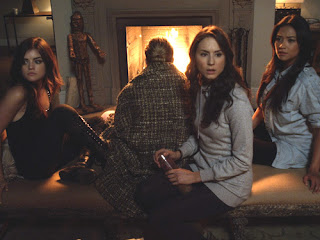 We posted about a twist that would be revealed in season 3 of Pretty Little Liars and it got me to thinking of all the ways the show could go. If they follow the books, we won’t be surprised. But if LOST has taught me anything, it’s that I am very spoiled when it comes to my TV. I want to be surprised. I need it. Otherwise, I’m not entertained. When it comes to TV, there’s nothing better than a good shocker or a jaw dropping WTF moment.

If they follow the books, the Alison we and the girls know has all along been Alison’s crazy, insane, twin Courtney. One major plot hole here is that her family hasn’t mentioned her at all. True, they could have pretended she didn’t exist and carted her off to a mental hospital. But I remember when Ali’s mom came to visit, she said something like “both my kids do.” If she had three, she may have said all my kids? I don’t know. I can’t give the writers that much credit here. Where would her twin even be hiding all this time? A storage shed? Now that I think about it, Mona should have hidden all her incriminating evidence in a steel shed somewhere. Maybe then I wouldn’t have been so disappointed at that finale. Spencer wouldn’t have found it. Arrow Sheds are pretty good Mona. In case you’re planning for next time.

Another theory floating around is that the visions the girls have been having of Ali are real. She’s real. Or in this case, still alive. Wouldn’t that be awesome? Maybe Ali is alive. But if they don’t go the twin route..why would she be alive then? How could she have faked her death? I see no other way around this. Her twin would have had the same DNA.

What do you think? Where would you like the show to take this?