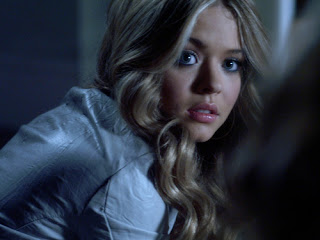 Hmm. What is in store for fans when Pretty Little liars returns for its third season? If you ask Sasha Pieterse, a big twist! Sasha, who plays Alison on the ABC Family hit show, teases that a surprising twist the fans don’t know about is on the way. Is she alive? Does she have a twin? Considering the show seems to be following the books about A’s identity and the fact we all thought that was going to be different, I’m going to guess the twin route will be taken. I’d love to see Alison alive though. Start guessing!

Just when we thought several mysteries on Pretty Little Liars had been wrapped up, we find out that one of the most important characters, if not the most important, Alison DiLaurentis (Sasha Pieterse), has something in store for Season 3 that will surprise all of us.

When Zap2It asked Sasha what we can expect from Ali in the upcoming season, she said, “Alison likes to manipulate everyone. There’s something the fans don’t know about a certain situation that ties back to Alison, and the way it all ties together is kind of crazy.”

Ali may not get a huge amount of screen time on PLL, but every second she appears is full of mystery and intrigue. We’re wondering what this “certain situation” is that the fans don’t know about. Could it be Ali’s twin? Could Ali still be alive, and manipulating Mona (Janel Parrish)? What if Vivian Darkbloom is the Black Swan?

With Season 3, anything is possible.