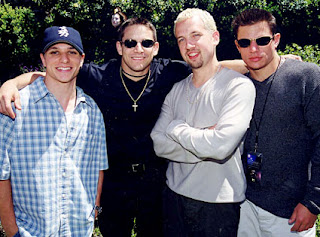 Last year, I was all set to go to the Backstreet Boys/New Kids on the Block concert in my city. Two days before the show, I broke my foot. I’m still incredibly bitter. With 90’s nostalgia running high lately, the rumor that 98 degrees may be reuniting for a Summer tour is welcome news. I just might have to check this out if they come near me. Then I could spend the rest of my night watching my Newlyweds dvds.

Would you go see them?

Because 98 Degrees might just be reuniting after a decade apart!
Reports are flying around that Nick Lachey, Drew Lachey, Jeff Timmons and Justin Jeffre are set to go on a 15-city tour this summer.

“Is it just me or does [98degrees.com] look a little different that it did yesterday? just saying,” Lachey, who’s expecting his first child with wife Vanessa Lachey, tweeted Wednesday.
“Look, you never can believe rumors, but I’d be open to it for sure!” Timmons wrote. The 38-year-old boy-bander turned part-time Chippendales performer also retweeted posts from excited fans about a possible reunion. (His rep told E! News they “can neither conform nor deny” reunion reports “at this time.)