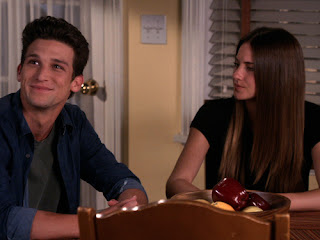 Everyone’s favorite worst tv show is back! And now they’re able to pimp their star out as a Golden Globe nominee. Just typing that out causes me physical pain. After begging Ricky to propose to her last season, Amy is in no hurry to get married. Apparently she just wanted the ring as a trophy. She gets a ton of pressure throughout the episode to get married immediately. She’s 17. Since when do people have to get married immediately after getting engaged? Don’t most places have long waiting lists anyway?

Ben is crushing on that girl Dylan he met at the party. They talk for hours on the phone and even set up a date after her parents pressure her into bringing him home to meet them. He cancels the date after getting some unwelcome news about his best friend Henry. Remember when he slept with Adrian at the party? Yeah, that happened. I swear this show is so incestuous. They all have sex with each other! They should get Chlamydia Testing at this point. Remember when Grace was in that Lifetime movie about Syphilis?

Anyways. Dylan and her friends invade Ben’s room to smoke pot when he breaks their date. Is that normal? To just bring drugs into a stranger’s room? When his parents are home? Weird. Naturally, all of their parents catch them. I guess Ben’s struggle this season will be smoking pot. Because he didn’t have enough issues with the drinking addiction.

Grace doesn’t want to get back together with Jack after kissing him at that party. She says it was a mistake. She kisses him again anyway. Her boyfriend finds out and promptly dumps her. Adrian’s..boyfriend? Breaks up with her too. Did she date that entire family? I seriously have no idea who is who anymore. She begs Grace to ask her mother to let her move in with her at the condo and go to Summer school with her. She’s underage! Why are these parents letting all their kids move out? Amy announces she wants to go to Summer school as well to keep Lauren company. Basically, everyone’s going to Summer school. This season will be taking place at Summer school.

Oh yeah, Ashley’s back and she’s still kind of a bitch to Amy. But Amy is kind of a bitch right back at her. Ashley got accepted into college already and Amy is in Summer school. This show is so weird.