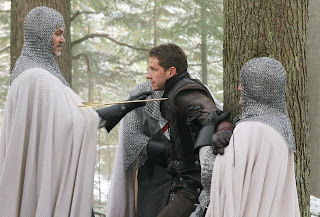 The dwarves are concerned with how Snow has changed. Ever since taking Rumply’s potion to make her forget Charming, she’s turned angry, mean, and her heart is full of darkness. After Snow breaks Happy’s mug (Oh no she didn’t) they confront her. She tells them not to worry for she won’t be taking her anger out on them anymore. She’s off to kill the Queen.

Mary isn’t having a better day either. The DNA results are back and the heart does belong to Kathryn. Even better? It was found inside Mary’s jewelry box. As if it couldn’t get worse, Emma finds a dagger hidden in Mary’s apartment. With no signs of a robbery, the evidence against Mary is piling up. It’s not looking good. Emma tells Mary it might be time for her to be smart and get a lawyer. Mr. Gold volunteers. He’s “invested in her future.” I bet he is. Mary takes him up on his offer. Hell, I would. Especially after Henry finds a key to Mary’s apartment at Regina’s.

Grumpy takes Snow back to Rumply to see if there’s anything he can do to fix her. He doesn’t have the answer but gives her a better weapon to kill the Queen. Well, at least he was helpful in some way. Charming goes to see him next for help stopping Snow before she commits an evil act. Rumpelstiltskin tells him that once again, true love will break the curse. Charming kisses Snow but it doesn’t work. He gets a punch in the head instead. Snow tries to shoot the queen but Charming jumps in front of the arrow. Snow is shocked anyone would die for her so she kisses him again. Ouila! The curse is broken! That was quick. Their happiness is short lived. The castle guards take Charming away.

David goes to Archie for help remembering his blackouts. He’s put under hypnosis and begins to remember. He’s not remembering Storybrooke. He’s remembering talking to Snow. He remembers Snow talking about killing the Queen and assumes she’s talking about Kathryn. He goes to speak to Mary and basically doubts her story. She’s rightfully pissed and tells him to get out. Did he just think Mary was walking around in a wig?

Mary finds a key inside her cell that unlocks it. Did Mr. Gold leave it there? Emma goes to him for help fighting Regina now that she believes Mary is being set up. Mr. Gold is more than happy to stop polishing Aladdin’s lamp and hear her out. More Mr. Gold please! He’s so interesting. Back in the jail cell, that pillow is all alone. Mary escapes. Does she not think that’s going to look incredibly guilty?

Back in Fairy Tale Land, Rumply finds a hair of Charming’s to go along with his hair of Snow. He puts them together and bottles it. He has now bottled love. According to him, once you have that, you can do anything. Will this have something to do with the curse of Storybrooke? What does he want that for? And while I’m asking questions, who is August? Why did he change Henry’s book? Why and how does he even know about it? What is he trying to accomplish?