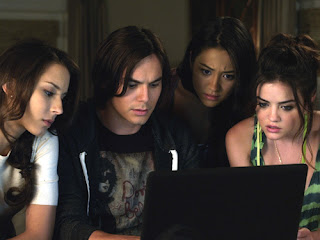 The girls mull over the latest findings from the videos. They made the decision to shut Hanna out and bring Caleb in. Will A make them regret it? Will Hanna? Poor Hanna thinks the girls are ignoring her and freezing her out when they start to lie about hanging together and begin to dodge her calls. They’re only trying to work with Caleb in secret but she doesn’t know that. A knows that. And A threatens Hanna to make Caleb stop or her mom’s secret about stealing the bank money will be told.

Caleb is able to uncover what appears to be a secret fake id of a brunette Alison from her secret box. Hanna has a memory of seeing Alison in a hair salon wearing a brown wig. Is it really Alison? And why is she pretending to be Vivienne Darkbloom? And what is the claim ticket for?

Hanna isn’t having a good day. Kate is now at her school and Spencer is convinced she’s seen her before. She recognizes her from a summer camp Melissa used to work for. Apparently she was unpopular and had a lot of bug bites. Who cares? I’m getting major Lucy Caboosey vibes here. Spencer warns Kate that she’ll reveal who she ~used to be if she’s ever anything but nice to Hanna. Spencer is such a good friend. A isn’t. A somehow gets a naked picture of Kate in the locker room and sends it from Hanna’s phone to the whole school. That really isn’t going to go over well with Daddy.

Hanna’s day gets worse when she finds out the girls are working with Caleb behind her back. She cries and opens up to Caleb about her mom stealing the money and how someone is anonymously blackmailing her. Caleb goes to Jenna’s house to presumably tell her to back off and Garrett shows up literally guns blazing. Whatever Garrett. Caleb could take you. Apparently it’s illegal to knock on someone’s door because Garrett practically runs Caleb over. What an abuse of power. Dude is losing his mind.

In storylines no one cares about news: Emily’s mother is back in town and wants to have dinner with her and Maya. I can’t tell if Maya is high or stupid at this dinner but she’s not smooth. She makes a few pot jokes and talks about her ex boyfriend. Emily is less than pleased. But later on they tell each other they love each other so I guess it’s okay. Aria is keeping Ezra a secret from her friends again. Season 1 flashback! She’s spending more time with Holden who has a secret of his own. Not gay? Then I don’t care. He has a huge bruise on his torso and my friend is quick to point out it looks like he got hit by a car. Hanna’s car maybe? That would be incredibly lame so I’m hoping not. I’m not even sure why we’re spending so much time on this kid and his secret. He’s been in town for like two days.

Fitz gets a job offer that Byron set up that would have him leaving for Louisiana in a few days. He really doesn’t want that man doing his daughter. The end of the episode is quite the shocker in the way that it ups the game completely. A isn’t playing around anymore. They go into Spencer’s dad’s desk (why can they just waltz right in? Does NO ONE have security in this town?) and takes out a GUN. Uhoh. Who is getting shot? My money was on Caleb after he learned so much about A. However, after the news that Tyler was just made a series regular, I’m ready to say goodbye to Garrett.

Tags: A Kiss Before LyingPretty Little Liars
No Comments
Share
0