October 4, 2011 Posted by Noelle No Comments 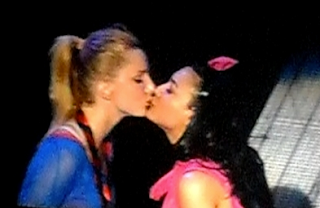 When Glee returns in a few weeks, it looks like fans of Brittana will have a lot to be happy about. Check out these spoilers on whether or not Brittany and Santana will finally get together.

According to my source, Brittany (Heather Morris) and Santana (Naya Rivera) are “officially a couple as of episode four.”

Who run the world? Brittana, bitches!

I’m also told that Finn (Cory Monteith) will get into the mix when Santana tries to hide her relationship with Brittany. He’ll call her out on her hypocrisy and forces her to deal with it. Word is, these Naya-Cory scenes are fantastic.

All of this will go down in episodes four and six (episode three airs tonight). Also in episode four, The Glee Project‘s Damian McGinty will make his debut as an exchange student from Ireland moving into Brittany’s house.