True Blood Spoiler – A Certain Someone May Return 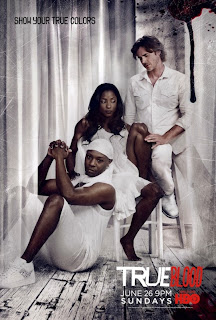 Spoiler alert! A certain someone that died on the season finale of True Blood last Sunday may not be gone for good. TVLine spoke with the dearly departed and caught a glimmer of hope for fans who may have been unhappy with how things went in the finale.

So who may be returning? Don’t click if you don’t want to know!

Tara! She’s not the character I was hoping would return actually *coughJESUScough* but this should make fans happy:

TVLINE | When did you first find out Tara was getting shot in the head?[Series creator] Alan Ball himself pulled me aside early on and told me that this was happening. And I was like, ‘OK, that’s cool.’ I know I’m coming back in some capacity, I just don’t know how I’m coming back. It’s scary as an actor to be in that position. Whatever they do, I think it’s the Golden Hour for Tara. But I don’t know how they’re going to revive me or if I’m dead. And that’s the big question: Can she be saved?

TVLINE | Has your contract option for Season 5 been officially picked up?
Yes. I know I’m coming back. I just don’t know in what capacity.

TVLINE | If she is brought back to life, it seems unlikely she’ll just be the same old Tara.
I like playing a human on the show. I like not having any powers. I like being the voice of reason. But it wouldn’t be a drama if we didn’t have a shift in things. Everything’s up in the air because half of my head is missing. [Laughs] I know Alan has big plans for me next season. But has he shared those plans with me? Not really.

TVLINE | Have you entertained the idea that she might become a vampire?
Not really. Some of my fans actually talked about that a couple years ago. They were like, “Wouldn’t it be great if Tara became a badass vampire? Wouldn’t that be amazing?” But as I said, I like being human. [Laughs] We don’t have that many on the show. And then I’d have to figure out how to talk with the fangs and all that crazy stuff. But with that kind of injury, even if I got the vampire blood could that really save me? I don’t know.

TVLINE | What did you think of Tara’s arc this season? She started out in a very happy place but as the season went on she reverted back to being somewhat of a victim.
I didn’t necessarily see her as the victim this season. I saw her as more of a survivor of the situation. And a fighter. We got to a point where she really had no choice. She got her hand burned on the door and at that moment she was like, “If I have to be here and fight with Marnie, then that’s what I have to do to survive.” What was great about this season for me is even though she did suffer, she suffered for a cause. And she was strong. And I really liked the humor in Tara that we got towards the end. It felt like Season 1 Tara with the one-liners. It was fun getting back to the sassy Tara. I just like to see her be strong and stable and not necessarily crying and whining. I like the more happy Tara but, you know, it’s a drama. Happiness only lasts for so long, as you can see.