True Blood – And When I Die – Season 4 Finale Recap 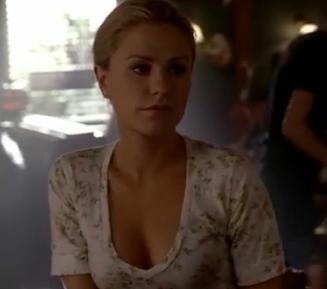 I really don’t know where to start with this recap. I feel like a reasonable amount happened in the episode but not enough to call it a finale. Oh wait. Then the last two minutes happened. Sookie has her share of men fighting over her. Three to be exact if you don’t count Sam. But who cares? And Pam is sick of her fairy vagina so maybe I shouldn’t even mention that Alcide propositions her and Sookie chooses neither vampire. No one cares right? This isn’t Twilight. But in other couple news that’s actually relevant, although sucky, Jason tells Hoyt about hooking up with Jessica. Hoyt responds by kicking his ass. After another rendezvous with Jessica, Jason answers the door to one of the biggest shockers of the night.

STEVE NEWLIN. HE’S ALIVE. HE’S BACK. AND HE’S A VAMPIRE. PRAISE HIS LIGHT!

It’s Halloween in Bon Temps and it sure is bringing out the crazy. Marnie stabs Jesus with a fork and ties him to a chair. She demands he give her his magic and then she stabs him and kills him. NOOOOOOOOOOO UGH. I knew this would happen but it doesn’t make it suck any less. I love Kevin Alejandro and I loved Jesus. A hot guy on the show not all up in Sookie’s b.s. was so refreshing. I hope they keep him on the show. Especially since Lafayette is a medium. And it seems like such a senseless death too. Considering how Marnie meets her end.

Marnie has taken Bill and Eric and is burning them at the stake when Sookie, Tara and Holly show up. Holly creates a salt circle around them to protect them as they chant a spell to bring back spirits to help them. Antonia and Gran appear to take Marnie. Gran literally yanks Marnie out of Lafayette and Antonia convinces her to just crossover with them. She gives up just like that? And Jesus had to die..WHY? UGH. Whatever. Seriously Kevin is it in your contract that you have to die in EVER role? Quit breaking my heart you gorgeous man you.

In small plot news, Sam is cornered by a wolf after Tommy’s funeral and that’s pretty much all we see of him in this episode. Some friend of Terry’s from the war is back in town and is apparently not happy that Terry is married to Arlene. I’m getting gay vibes. But he’s probably evil because dun dun dun. Rene shows up to warn Arlene to stay away from both of them. I love the ghostly visits in this episode.

Now it’s time for some more tears. From me anyway. Lafayette is crying in bed after learning what he did to Jesus under Marnie’s control. He lost the love of his life and I lost something beautiful to watch every week on HBO. But did I? Jesus appears to Lafayette to say goodbye. Ugh. It’s so sad! “Dude. I’m dead. You’re a medium. I’ll always be around.” Pull a LOST and keep him on the show even if he’s a vision!

So uh. Did anyone miss Russell? Alcide goes to his construction company where he learns that a worker was glamoured and a giant cement hole was dug. There are chains on the ground..Looks like Russell Edgington will be back next season to raise hell. I loved that crazy old man. I dig it. Bill and Eric are surprised to learn that Nan has been fired and is rebelling against the authority and wants the two of them to join her. It really didn’t help her case once she threatened them with Sookie. Bill immediately kills her. Bye bye Nan.

Now the biggest shocker of the night for most True Blood fans. Debbie storms Sookie’s house and pulls a shotgun on her. Before Debbie or Sookie can do anything, Tara strolls in, sees what’s going on, screams and runs in front of Sookie. Debbie pulls the trigger and basically blows of half of Tara’s head. Sookie loses it, grabs the shotgun and kills Debbie. Finally. But omg did Tara really just get killed off? Can vampire blood save her if her head is blown to smithereens??

Despite the shockers, the one liners were on POINT tonight.

Here are the funniest quotes of the night:

Pam: I am so sick of Sookie and her precious fairy vagina and stupid name.

Eric: What a bitch.