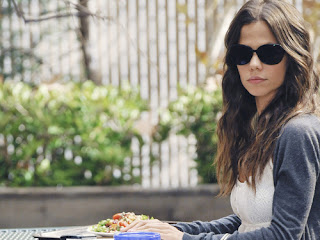 A is determined to break Emily with their games. They send Emily a picture of Aria and Fitz together with the instructions to show it to Ella and she’ll be free. Emily can’t take it and drives off..so she can run in the woods..in the middle of the night. Why do they always find themselves in a dark place in the middle of the night with a killer on the loose? Idiots. She keeps running and running like she’s Forrest Gump right up to Dr. Sullivan’s door. She’s ready to talk. The other girls are already there waiting for her. They finally tell someone the truth. Well..most of it. Just not that they’re responsible for Jenna’s blinding. I mean..they aren’t REALLY. They just knew about it.

Hanna’s Grandma is in town to be overly awesome and an excuse to have Betty Buckley on our screens. I’m getting major Paula Deen vibes from her. That means Hanna’s Grandma is awesome. She’s in town early for Hanna’s dad’s wedding rehearsal. Hanna’s stepsister-to-be still has it out for her and Hanna is stupid enough to believe the chick is ready to be friends. What Kate really has in store for Hanna is getting her drunk until she pukes all over her step mom’s gown. What a bitch. Can’t wait for Hanna’s payback.

The situation with Mike, whatever it is, is getting worse. I’ve heard everything from he’s bipolar to he’s gay and doesn’t want to come out. I prefer the theory A is blackmailing him but this episode kinda put the kabosh on that one. When Aria and Ella try to get Mike away from guarding his laptop to come downstairs for some dinner, Ella tries to take his computer away. Mike responds so violently he ends up hurting his mom. Ella is visibly shaken and asks Aria to lie to her dad about what happened. Ella seems to be in some serious denial about what’s wrong with her son. The dad wants him on medication and she just wants to talk to him.

Maya is back in town and Emily has dinner with her. I don’t really care or have anything to say about this scene except some suspicious dialogue that I couldn’t help but notice. Emily mentions that there were a lot of people trying to hurt her and Maya says “I was one of them.” Not suspicious on its own because it could just be because Maya took off and checked out of their relationship. But she DID live in Ali’s house. I dunno. I have my eye on you Maya.

Speaking of Ali’s house, Toby and Spencer are busy making out in his truck while parked in front of Jason’s house (WTF??) when they notice two shadows inside. Spencer has had enough of this b.s. and marches right up to the door only to be surprised when a violent version of her father emerges. When Spencer and Toby demand answers, he flips out on Toby and punches the car when Spencer drives off inside.

When she gets home, he tells her that he made a deal with Ali’s family to fudge over the dates on her grandmother’s will. She died right before Ali went missing and had changed the will to cut Jason out of it. Ali’s parents begged him to change the dates so Jason wouldn’t look like a murder suspect. Spencer remembers something in a flashback of Ali asking what would motivate a grandmother to disown a grandchild, insinuating her plans to screw Jason over. Damn. This girl was ruthless. Spencer jumps to conclusions and thinks this is motive for Jason to kill Ali once he found out that she had convinced his grandma to cut him out. Spencer’s father doesn’t want her to go to the cops. Jason is probably his kid or something.

It’s Dr. Sullivan’s turn to be harassed by A. She makes a speech in school about how bullying through texts is cowardly and Jenna seems to find this amusing. I wish someone would punch the smirk off her face. Emily tells Jenna to get her stick out of her way and it’s pretty awesome. A calls Dr. Sullivan playing a portion of her conversation with the girls on a loop. Now she knows that her room was bugged so she calls the cops. And OF COURSE the only cop in town is Garrett and he won’t cooperate unless she tells him who was in the room with her. What an ass. The bug is on the shelf! She couldn’t find that? Dr. Sullivan loses patience and takes matters into her own hands. She goes through her files and discovers who A is. She calls the girls to meet her but doesn’t say the identity over the phone. UGH. When they get there she’s gone followed by a text from A claiming “The Dr. is out.”

Tags: I Must ConfessPretty Little Liars
No Comments
Share
0