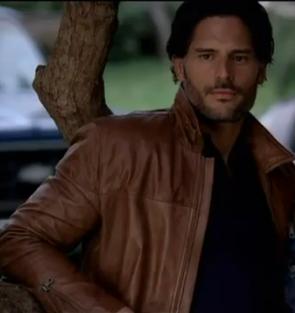 After the spell was cast last week there was only one vampire casualty. Bill is trying to spin her death as a vampire suicide so as to not bring anymore attention to the impending war against the witches. Before Jessica gets that far outside, Jason dives through the air (lol) and saves her. Jessica kisses him to repay him and promptly sets off to break up with Hoyt. Poor Jessica. She may be getting in touch with her vamper self but she’s still a naive 17 year old.

Jessica walks in and breaks up with Hoyt and he doesn’t take it well. He cries, breaks down and is basically having a tantrum on the floor. It’s actually kind of touching although a bit over the top for his character. He repeats over and over that he would just die if Jessica leaves him so Jessica tells him to die already and kills him.

OMG. It’s a dream. Thank God. I love Hoyt. The actual break up scene is a lot worse in terms of Hoyt’s character. Jessica doesn’t kill him but he acts like an asshole Also out of character for him. I kind of expected this to be a dream as well but it’s not. Hoyt kicks Jessica out of the house and takes back his invitation when she confesses that there’s someone else. She runs to Jason hoping that he’ll be there for her but he wants nothing to do with her breaking his best friend’s heart. He kicks her out and takes back his invitation as well.

Sookie and Eric are celebrating what’s probably the last of their honeymoon phase. Sookie offers to let Eric feed off of her and he insists she drink his blood as well. What follows is what I would describe as a high on V fantasy. After taking a shower together they end up on a bed in the middle of the forest in the snow. Okay. Honeymoon’s over. Antonia is pissed that her spell didn’t work as planned. Bill wants to meet to discuss possible peace and Eric and Sookie want to join what is most definitely going to be a fight. Sookie says she’s willing to die for the people she loves. Uhoh.

In smaller subplot news, the werewolves want to stay out of all this drama. Debbie and Alcide join their new pack that is lead by the douche who hates Sam for hanging with Luna. Debbie asks Alcide to promise to stay away from Sookie and all her vampire bs. He agreed but like that’s really going to last long. Give Alcide something to do please.

Tommy breaks into Mrs. Fortenberry’s to steal some of her clothes to pose as her and sell her land. Tommy is such a little shit. The creepy ghost lady is still singing to the baby and Laffy and his new ‘do want nothing to do with this. Unfortunately for him, he’s minding his own business on the couch when he too is possessed by her ghost. Geez. This whole town needs to be like exorcised. Apparently the ghost lady lost a baby or something and now she’s using Laffy to steal Arlene’s. Whatever. I don’t care. This plot is getting up there with Andy’s addiction storyline. I love Arlene and Terry but ugh.

Bill and Antonia meet and it’s almost immediate that the fight breaks out. Antonia casts the spell of like, fog to help her side’s chances. Tara is among them and it’s not long before Pam catches her. Right before Tara is killed, Bill saves her. Does this mean they’ll be okay from now on? Somewhere during the fight, Sookie uses her powers to save herself and is then shot in the cemetery .She collapses and begins to bleed out until Alcide arrives to pick her up.

Will vampire blood save her? Whose is she going to use?

Funniest Quote of the Night: