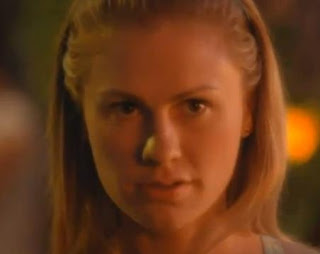 Sookie losing a year of her life in Fairy land has really made things difficult. Her (and us the viewers) have to adjust to all the changes in Bon Temps. Eric owning Sookie’s house and his obsession for her to be his is creepy. What is it with Vampires and ownership? Although, props on his moves to woo her. Way cuter and more clever than Bill. I mean building himself a cubby in Sookie’s living room and leaving a bottle of his blood in her fridge? That’s just hilarious. Sookie goes to see Bill and is shocked that she can’t even walk right in his house unannounced anymore.

You can’t do that with the new Vampire King of Louisiana.

His house has been redone and decorated to be befitting of a King and he has snipers ready to shoot Sookie for trying to get in. Bill promptly stops boning the new chick he’s seeing (his spy on the witches) and agrees to see Sookie. Bill being unable to help Sookie is quite a shock to her. And me. She’s been so used to being able to rely on Bill for everything it’s quite a change for him to not jump at every opportunity. Everything is different. Bam.

Flashback to 1982 Bill. He’s British, a punk rocker and he’s wearing eyeliner. LOL forever. I don’t know where to begin with this one. Bill is dining on his meal for the evening when he meets Nan for the first time. She’s in awe of Bill not killing his prey and recruits him to help vampires go mainstream. By the sounds of it, this is where it all started for Vampires and True Blood was just being formed. It looks like Bill has been working with her for quite some time. Cut to last year when Bill and the Queen are about to do battle. A group of snipers walk in and kill the Queen on Bill’s command. Nan walks in and pronounces him King. Whoa.

Russel sure put their work a little behind schedule. The protesters outside Fangtasia I would liken to the Westboro Church. Hoyt gets beaten trying to defend his love for Jessica but there’s really no talking to these people. Poor Hoyt. He and Jessica are having their problems. His obvious love for her doesn’t seem to be enough for her anymore. When Hoyt refuses to drink her blood to heal his wounds, Jessica heads to Fangtasia to hook up (but really feed) on the hot guy she met last week. Will she be cheating on him for real soon?

Sam’s “anger management” group who are really a bunch of shifters, are still getting together. Sam tries to get closer to Luna but she’s hesitant about sharing her darkest secrets with him. She confesses to them that she’s a skinwalker. Native American folklore will tell you that they’re evil but she became one by a loophole. Basically, she differs from a shifter in that she can become another human. Tommy is creepin nearby and Sam catches him. I’ve decided that Tommy looks like Jimmy Neutron with his new hair. Are we ever gonna get an explanation for that? He just wants to be brothers with you Sam. Even though you shot him in the leg. I don’t know about you but I’d hold a grudge.

Jason is tied to a bed and being held captive by Crystal’s crazy boyfriend. I don’t know what they did for the past year but girl went nuts too. She shows up high on V and announces that her and her man want to make a baby with Jason. After being bewildered and a little perturbed that her boyfriend was unbuttoning his pants as well, Jason asks why. They haven’t been able to make a baby and they want to keep their line of were panthers going. But in order to get one out of Jason, he needs to become one too. Then they bite him. Holy crap! Did they just turn Jason??

Tara is back in Bon Temps to see Sookie but it’s not long before Sookie is running off chasing a vampire. Tara and her amazing new hairdo go to see Lafayette and she agrees to accompany the fabulous duo to their weekly witchy meeting. Bill has put Eric up to spying on this particular group of witches after hearing about their little accomplishment with the bird. If they are able to control the dead, they can control vampires. Eric shows up to kill Marnie but..something goes down. I’m not quite sure what just happened but once they all join hands Marnie becomes possessed once again. Eric looks scared out of his mind and books it. Sookie runs into him on the street and not only does he still look frightened but I swear he got a haircut. To top it all off, Eric seems to have gotten amnesia.

Here’s what you need to know: Amnesia-Eric is adorable. He looks like a little kid. This episode was awesome. It would only have been better if Crystal was accidentally run over.